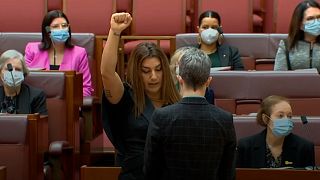 Australian Greens Senator Lidia Thorpe was made to retake her oath of office in parliament on August 1, after adding the word “colonising” to the standard text in reference to Queen Elizabeth II.

Thorpe, who is indigenous and known for her activism, held her fist in the air and said “I, sovereign Lidia Thorpe, do swear that I will be faithful and bear true allegiance to the colonising Her Majesty Queen Elizabeth II…” before she was cut off and informed she “must recite the oath as printed on the card”.

Thorpe had previously commented on the oath on July 26, saying, “It’s 2022 and we’re swearing allegiance to a queen of another country.”

She doubled down on her message on August 1, tweeting “Sovereignty never ceded.”