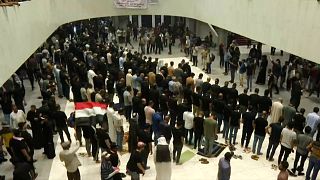 Despite tear gas, water cannon and baking temperatures that touched 47 degrees Celsius (116 degrees Fahrenheit), they stormed the complex on Saturday after pulling down heavy concrete barricades on roads leading to Baghdad's fortified Green Zone of diplomatic and government buildings.

Nearly ten months after October elections, Iraq is still without a new government despite intense negotiations between factions.