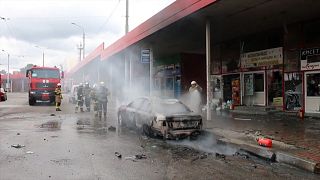 Ukraine: At least two dead in Russian bombing in Kharkiv

Russian shells hit a densely populated area of Ukraine's second city, Kharkiv, killing at least two people, according to officials and witnesses at the scene.

The shelling comes a day after Russia reaffirmed its intention to seize territory beyond eastern Ukraine.

The governor of the Kharkiv region, Oleh Syniehubov, said that Russian forces had also begun shelling wheat fields in the region, setting them on fire, which could cause the region to lose its crops.