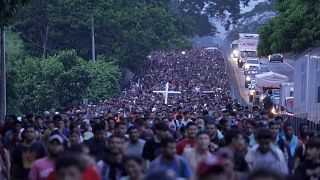 Migrants caravan continues its journey to the US border

A caravan of 4,000 to 5,000 migrants, mostly from Venezuela, Central America and the Caribbean, headed through southern Mexico to the United States on Tuesday.

The departure of this year's largest caravan coincides with the Summit of the Americas, a regional gathering of representatives from nearly every country in Latin America, Central America and the Caribbean being held in Los Angeles.

One of the topics the group is discussing is how to jointly manage the growing regional migration crisis.

According to official figures, some 50,000 migrants applied for refugee status in 2022, 20% more than in the same period last year.

Although migrant caravans attract a lot of media attention, they represent only a minority of undocumented migrants who cross Mexico with the help of migrant smugglers.