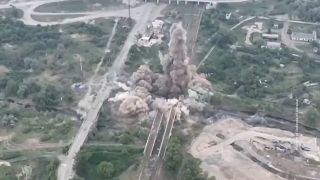 Ukrainian soldiers have blown up a bridge linking towns in the eastern Luhansk region to deter a Russian offensive in the area, the Ukrainian defence ministry said on Wednesday.

Troops from the Special Operations Forces (SOF), the National Guard, the Rapid Reaction Brigade and the Security Service of Ukraine (SSU) carried out the operation, the ministry said. A video released on Wednesday was described as showing the explosion.