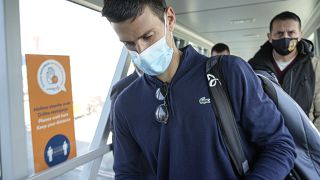 Novak Djokovic arrived in his native Serbia after being deported from Australia because he was not vaccinated against COVID-19, ending his hopes of defending his Australian Open title.

The tennis star’s exit from Australia closed at least the first chapter in a dizzying drama that has resonance in the world of elite sports, Australian pandemic politics and the polarized debate over the COVID-19 shots.

But even as one saga appeared to close, another opened as questions arose over whether he would be barred from the next Grand Slam tournament, the French Open.

A plane carrying the No. 1-ranked player from his stopover in Dubai, United Arab Emirates, touched down in the Serbian capital, Belgrade, where he was expected to receive a hero’s welcome.