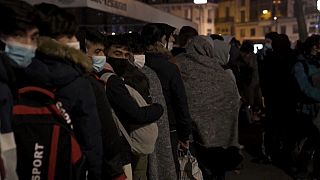 French security forces and volunteers have evacuated hundreds of people who gathered and set up tents on Place de la République in Paris to demand authorities provide decent housing for migrants and asylum seekers.

Mamoutou Ouattara, 32-year-old migrant from Ivory Coast was among the demonstrators. "I was sleeping in a squat before and now I am here with my wife and daughter. In the squat there were many of us, and my daughter wasn't able to go to school so I need stable housing for her to go to school."

Utopia 56, a French volunteering organisation, is calling for migrants and asylum seekers to be given a safe space.

A similar protest last November was broken up by police, who used violent tactics that shocked the country. This time, the evacuation was peaceful. Just after midnight, the authorities began a sheltering operation, transporting people in buses to an emergency accommodation structure.