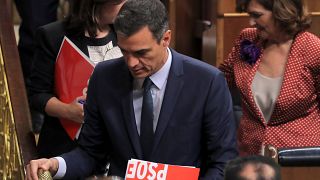 Spain might face fourth election in as many years

Coalition talks between the far-left Podemos party and Spain’s caretaker socialist government have broken down. Acting Prime Minister Pedro Sanchez has until 23 September to form a majority coalition or face yet another general election. If talks fail completely and elections go ahead, it would be the fourth poll in as many years in the country.

Back in July, the Sanchez’s Socialist Party and Podemos Parliamentary group came close to striking a deal to form a coalition, but the far-left Podemos party turned Sanchez's offer down, leading to a mutual lack of trust between the 2 rival parties.

Juan López Uralde is an MP from Podemos and a member of the group’s negotiating team. He told Euronews:

“It is clear the work of both negotiations team is over, we have gone a far as we can go, it is now in the hands of both the party leaders, Pedro Sanchez, and Pablo Iglesias.”

Euronews's Jaime Velazquez reports from Madrid saying that the feeling in Spain is “quite pessimistic, it looks like we are heading to an election re-run.”