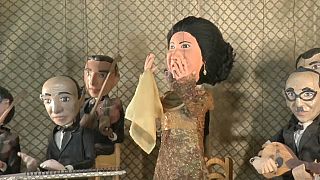 Legendary Egyptian singer returns to the stage - as a puppet

A Cairo puppet theatre is paying homage to the legacy of one of the greatest personalities of Arab song - Om Kalthoum.

On the first Thursday of every month at El Sakia puppet theatre, 10 professional puppeteers use an orchestra of marionettes to re-enact iconic performances by the Star of the East.

The show has been a big hit and dozens of fans gather monthly to watch Om Kalthoum live in concert once again.

Along with a unique voice, Om Kalthoum developed a signature style, famously holding a napkin while serenading passionately to a live audience of hundreds.

The puppeteers ensured that this detail, along with many others, were highlighted in the re-enactment.

"We pay great attention to every detail, which Om Kalthoum did in the past. We try to imitate it as we attempt to relive Om Kalthoum's legacy," said puppeteer Mohamed Fawzy Bakkar.