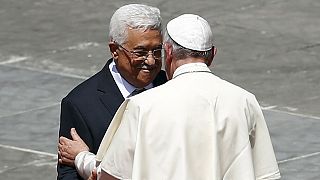 Pope Francis canonised four nuns on Sunday, including two from what was 19th century Palestine, in the hope of encouraging Christians across the Middle East who are facing a wave of persecution from Islamic extremists.

Sisters Mariam Bawardy and Marie Alphonsine Ghattas were among four nuns who were made saints Sunday at a Mass in St. Peter’s Square. Palestinian President Mahmoud Abbas and an estimated two thousand pilgrims from the region, attended the canonisation of the first saints from the Holy Land since the early years of Christianity.