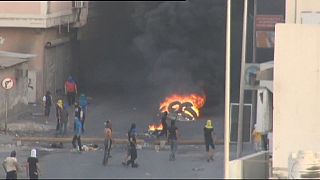 Protesters clashed with police in Bahrain on Friday, April 17, after marches demanding political change and the release of opposition activists took place ahead of the Formula One Bahrain Grand Prix on April 19. Protesters called for the release of Sheikh Ali Salman, chairman of the opposition Wefaq Society, who was detained in December, and other activists.