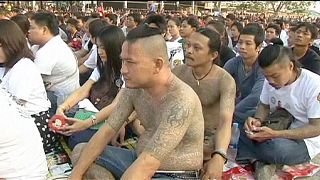 Thousands of followers of the late Buddhist monk Luang Phor Pern, who died in 2002, gather at a temple near Bangkok to pay their respects to him. The monk is believed to be the founder of magic tattoos. Some people say they became “possessed” by the spirit of the animals tattooed on them, falling into trances and acting out the animal by running up and down the temple grounds, snarling, shouting and waving their arms about.