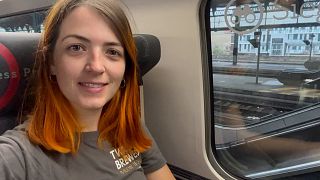 Though many of us regularly take trains within our own country, we often don’t think of doing the same when travelling abroad.

We can easily come up with excuses for plane over train: not enough holiday leave from work, planes are cheaper or, even, that we wouldn’t know how to book a long distance train journey. But we wanted to put one excuse to the test: being in a hurry to get to our destination.

We have such an extensive train network across Europe, where you can depart right from the city centre, so maybe flying isn’t always the quickest option?

I decided to find out for myself when I needed to get to Euronews’ headquarters in Lyon from London. In one direction I flew and in the other I took the train. Here’s what I learnt.

How long does it really take to fly from London to Lyon?

I started my journey early on a Sunday morning in east London. The first leg was a taxi to London St. Pancras station where I boarded the train to London Luton Airport.

I have to say this is my least favourite London airport to travel to, purely because the train station isn’t at the airport - you have to take a shuttle bus. If your train arrival coincides with the bus, you’re golden. If not, you could be waiting a while.

Once inside the airport it was a quick process to drop off my baggage and get through security. From leaving my front door to being through into the departures lounge, it took two hours in total.

Unfortunately, as is common with flights and particularly with budget airlines, my flight was delayed by an hour. This was particularly annoying as I had just bought a quick to-go breakfast as I didn’t think I had time for a sit down meal.

An hour later, and over four hours after I had left the house, I was finally at my gate. It was a pretty full flight so it then took further time to board.

Finally, five hours after I had left the house we were taking off. Of course at this point, the journey sped up. The flight time from London to Lyon is just one hour 45 minutes but the fact that it took me five hours to get to that point really made me think about all the added time around flying.

Once out of the airport, I hopped on the Rhonexpress tram which takes you to Lyon Part-Dieu, the main train station in the centre of town. The service runs four times an hour and takes about 30 minutes so there’s never long to wait.

I arrived at Lyon Part-Dieu station eight hours after I left the house in London. From there I jumped in a taxi to make my way across the city to where I was staying.

In total, from door to door, the journey took me eight hours and 25 minutes. Though it’s not the worst it could have been, six hours and 40 minutes of added time outside of the flight does feel like quite a lot.

How long does the train take Lyon to London?

For my trip back to the UK, I took a bus from my accommodation in Lyon to the train station, a train to Paris, a metro to change stations in Paris, the Eurostar to London and then a taxi home.

The train for Paris stopped at two stations in Lyon which meant I could board at the one closest to my house - just five minutes by bus.

I left my house arguably way too early. But I hadn’t been to that station before and Sunday services are slightly erratic so I didn’t want to be stressed.

The TGV train from Lyon to Paris takes less than two hours. I travelled in business class on the top deck which made it a really nice experience. The train was quiet, I had a great view, the seat was roomy and I had several sockets to charge my electricals.

Three hours after I had left the house I had already arrived at Paris Gare de Lyon. By hour three of my flying journey, I had been sat in the airport for an hour. It was interesting to compare how much progress I had made on my journeys.

The Eurostar to London departs from Paris Gare du Nord station so I took the D-train three stops to get there. Coming out of the metro at Gare du Nord, the Eurostar wasn’t obviously signposted at first but I soon found where to go.

The general advice for the Eurostar is to arrive 60-90 minutes before your train departs to give you plenty of time to get through passport control and security, even if there are big queues.

One big advantage is that you go through both French and British passport control before your journey so although it may take a little longer beforehand, it’s a quick exit at the other end.

I travelled in Business Class on the Eurostar. This meant I could have taken up to three suitcases with no weight limit onboard (as long as you can lift them). It also means you can fast track through security. If you want to really cut down your travel time, this is a great way to do it. Plus once you’re all checked in, you have access to the Business Class lounge where there’s free drinks and snacks.

Less than five hours after I had left the house, filled up on coffee and madeleines, I was onboard the Eurostar in Paris waiting to depart to London.

The journey to London took 2 hours 17 minutes during which time I was served a delicious three-course meal designed with Michelin-starred chef Raymond Blanc OBE. With wine, of course.

Once again the journey was quiet, relaxing and in a large comfortable seat. I really enjoyed seeing the views as we travelled across France and the whole journey felt like a real treat rather than a slog at either end of a trip.

I arrived at London St. Pancras 7 hours and 40 minutes after I had left the house in Lyon. From there I hopped in a taxi home and door to door the journey came in at eight hours and ten minutes. Fifteen minutes quicker than my journey by air.

Is taking the train more expensive than flying?

Time isn’t always the main factor when choosing how to travel. More than ever, cost plays a huge role for most travellers.

On the way to Lyon I flew with easyJet and on the way back, I travelled in Eurostar Business Class which is obviously more expensive. However when bought as part of a return you can get Eurostar tickets in standard class for as little as €45, though there’s currently a sale with prices starting from €29.

Here’s a rough breakdown of costs to help you compare.

Airline ticket (including one hold luggage): from €64.65

Eurostar to London: from €45 (one way, when bought as part of a return)

Of course prices can vary hugely, depending on lots of factors. Follow these tips to find the cheapest flights.

According to Eurostar, to find the best deal you should book in advance - they have an 11-month booking window for any of you super organised travellers. They also suggest travelling mid-week - Tuesdays and Wednesdays are the best days for cheap fares.

Is travelling by train quicker than flying?

In the grand scheme of things, I’d say the journey between Lyon and London was roughly the same duration, whether you travel by air or by train.

I, personally, found the train journey much more calming and relaxing. If you can afford it, I’d hugely recommend travelling business class to really start your holiday off right - it felt like an enjoyable part of the holiday rather than just the journey to get there.

Plus, taking the train is much better for the environment. One journey on the Eurostar from London to Paris produces 14 times less emissions than a flight for the same trip.

So if it takes the same amount of time and isn’t more expensive, why not take the train for your next holiday?

Watch the video above to learn more about travelling by train.