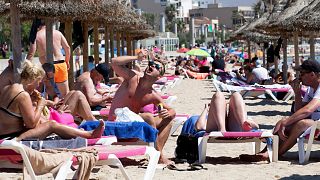 Mallorca is looking to cap the number of hotel beds for tourists to combat overcrowding, the island’s governing councils announced this week.

The plan is to set a cap of 430,000 tourist beds across the island, with the President of the Mallorca Council, Catalina Cladera, saying they want “tourism of greater value and less volume”.

After COVID-19 travel restrictions were lifted, the island saw unprecedented visitor numbers this summer. Tourists rapidly filled hotel rooms and holiday rentals with Cladera admitting that “the recurring debate about overcrowding is back”.

“I won’t deny it, there has been overcrowding this summer,” she said. “However, only in some places and at certain times.”

Earlier this week Mallorca Council confirmed it will be reassessing its tourism plan and cutting the number of visitors to the island. There will be a limit on the number of hotel beds and how they can be marketed.

It also announced an increase in the number of tourism inspectors to carry out checks on illegal holiday lets.

Popular party destinations are cracking down on drunk tourists

Across the Balearic Islands, authorities have introduced a number of tough regulations this year in an attempt to reduce overcrowding. Drunken tourists that previously crowded the streets have been a particular target for the new rules.

Alcohol limits have been imposed at many all-inclusive resorts in Magaluf, El Arenal and on the island of Ibiza. Guests in some locations have been limited to three drinks at dinner and three drinks at lunch - any further alcoholic beverages have to be purchased separately.

The legislation also banned happy hours, pub crawls, two-for-one drink offers, the sale of alcohol in shops between 9:30pm and 8am, and the advertising of party boats in certain areas.

Ibiza in particular is looking to distance itself from its reputation as a drunken party destination. Local authorities are instead hoping to focus on more sustainable tourism like the island’s numerous wellness and eco-resorts.