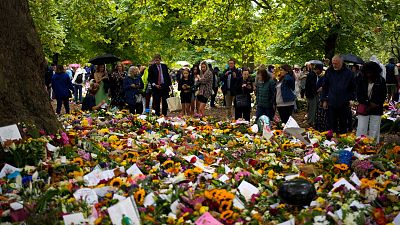 Across the world, millions are grieving the passing of Queen Elizabeth II.

Tributes have poured in from every corner of the globe, from New Zealand to New York.

But London - the city where the monarch spent the Blitz and lived much of her life - will doubtless be the centre of commemoration. As of Wednesday morning, more than 2000 people were already lining up to see the Queen lying-in-state.

With hundreds of thousands more mourners expected, the cabinet office is urging travellers to plan ahead.

"We recognise that many people will travel to Buckingham Palace and other Royal Residences as a mark of their respect,” a spokesperson said.

“We expect large crowds, which can pose risks to public safety. Those who do travel are asked to follow any instructions given to them by stewards and the police.”

If you want to visit the capital to pay your respects, here’s everything you need to know.

If you’re visiting London, you’ll want to line up your visit with the key commemoration events. The UK is in an official period of mourning until seven days after the Queen’s funeral. But the big events will take place within the next ten days.

When and where will the Queen lie in state?

The Queen’s coffin has arrived in London.

From 5pm on Wednesday 14 September, The Queen will ‘lie in state’ for four full days, until the morning of Monday 19 September. It will be mounted atop a raised platform in Westminster Hall.

On Tuesday night, the route for people queuing released last night by the UK government.

The line will start at Albert Embankment near Lambeth Bridge, and may stretch all the way to Southwark Park in south-east London.

Expect long queues - many mourners lined up for hours to catch a glimpse of the Queen Mother’s coffin in 2002.

When is the Queen’s funeral - and can you go?

Queen Elizabeth II's funeral is confirmed for 11am on Monday 19 September.

It has been confirmed that the day will be a bank holiday in England, Wales, Northern Ireland and Scotland.

Where will the Queen’s funeral be held?

The funeral will be held in Westminster Abbey. It is a huge church close to Westminster tube station, and it’s where the Queen married Prince Philip in 1947, and was crowned in 1953. The funeral will start at 11am. At midday the UK will observe a two-minute silence.

Before the event, there will be a short procession between Westminster Hall and Westminster Abbey. The service itself will be closed to the public; just 2,000 dignitaries and notables will be invited, including senior UK politicians and heads of state from around the world.

The funeral will be televised on all major TV channels. Princess Diana’s 1997 funeral remains the most-watched live televised event of all time.

Can I go to the Queen’s funeral procession?

After the one-hour funeral service in Westminster Abbey, the Queen's coffin will proceed to Wellington Arch, at London's Hyde Park Corner.

The large ceremonial procession will contain members of the royal family and hundreds of soldiers. To be par of the crowd, head to the Mall - the large avenue stretching up to Buckingham Palace. The nearest tube stations are Hyde Park Corner, Charing Cross, St James' Park, and Green Park - however, authorities have requested people avoid Green Park if possible.

It is likely to get busy very early, so to secure a good spot, such as near the railings, you will have to arrive very early. For previous royal processions, onlookers have camped out overnight to get the best spots, or gathered from first light.

Have concerts and other big events in London been cancelled?

If you are travelling to London for a different event, check before you leave home - it may have been cancelled.

The final two nights of the BBC Proms on Friday 9 and Saturday 10 September did not go ahead. Several football matches and local community events have also been cancelled.

Where in London can you go to pay your respects?

Many have left floral tributes at Buckingham Palace itself - but floral tributes will be removed every 12 hours and placed in the ‘tribute area’ at nearby Green Park. Members of the public can also lay flowers directly at these sites.

Mourners may also leave flowers at Windsor castle, a short journey out of London, a long-time Royal residence. Tributes will be brought inside the castle each evening, and placed on the Castle Chapter grass.

The Royal Family website has added a "Book of Condolence" for people to pay tribute to the Queen.

How to get to London for the Queen’s funeral

If you’re travelling into London from other parts of the UK, trains are a good option. As a mark of ‘respect,’ the National Union of Rail, Maritime and Transport Workers (RMT) have called off a planned rail strike on 15 and 17 September.

"RMT joins the whole nation in paying its respects to Queen Elizabeth.

"The planned railway strike action on 15 and 17 September is suspended.

"We express our deepest condolences to her family, friends and the country."

There are no planned strikes or disruptions to planes or trains into the UK from other parts of Europe. However, there has been disruption at UK airports recently so check with your airline and airport before you travel.

Are London trains and tubes running as normal?

The UK government expects delays on some services in the aftermath of the Queen’s death. Access to some areas in central London will be restricted, with road closures and diversions, these will be announced soon.

"Customers are encouraged to avoid Green Park Tube station if possible, due to high numbers of customers passing through, and to keep capacity for customers who need step-free access," a Transport for London statement advises.

"Other Tube stations, such as Victoria, Piccadilly Circus and St James's Park, are within a short walking distance of Buckingham Palace."

However, the tube, buses, and trains will likely be your best bet.

Due to road closures, some buses will stop short of their destination or will be on diversion until after the events. They may also run to a reduced frequency.

Are flights running as normal?

Flights will mostly run as scheduled, but there will be some disruption so that plane noise does not disrupt the Queen's funeral procession.

In a statement, Heathrow Airport said that it will be making “appropriate alterations to our operation” out of respect” for the mourning period.

On Wednesday, some flights will be delayed between 1.50pm and 3.40pm to “ensure silence over central London as the ceremonial procession moves from Buckingham Palace to Westminster Hall”.

“We anticipate further changes to the Heathrow operation on Monday September 19, when Her Majesty’s funeral is due to take place, and will communicate those in more detail over coming days," an airport spokesperson said.

Where to stay in London that’s close to the Mall, Buckingham Palace, and Hyde Park

Central London accommodation is likely to be busy so book as soon as possible if you are planning to travel.

Options include the Royal Lancaster London, a luxury hotel near Hyde Park, with swish double rooms from around £400 (€460) per night.

Boutique hotel the Guardsman in Westminster is also nearby, with doubles from £280 (€320).

Sloane Place has a long history of royal patronage. The Chelsea hotel is linked to the Sloane Club, a private members' establishment founded in 1922 by Princess Helena, Queen Victoria’s daughter. Nightly rates at Sloane Place start from £200 (€234) on a B&B basis.

The Hux Hotel offers boutique accommodation right by Kensington Gardens, immediately to the west of Hyde Park. Doubles start from £360 (€415) per night. The nearby Milestone Hotel & Residences also overlooks the gardens, with rooms from £480 (€550) per night.

Just off Piccadilly Circus, the Dilly Hotel is another option for those looking for a place to stay close to the commemorations. Doubles prices vary significantly depending on the day, but start from £280 (€320).

If you're hoping to catch a glimpse of the new monarch, perhaps try The Rubens at the Palace. The hotel sits immediately opposite the Royal Mews, the entrance to Buckingham Palace used by the Royal Family. Doubles start at £480 (€550) per night.

A post shared by The Rubens At The Palace (@rubenshotel)

For less expensive options, try Zedwell (£89/€105 per night for a double). The chain offers soundless, windowless and air-purified cocoons close to Piccadilly Circus.

If you want to pay your respects outside of the city centre, you could try a Le Boat self-driving boating holiday. Mooring is possible in Windsor, where the Queen will finally be laid to rest.

A four-night self-catered stay on the River Thames, starting and finishing at Le Boat’s base in Chertsey arriving 17 September 2022, is priced from £829 per six-sleeper boat.

If you want to book a homestay or apartments, try one of the ethical alternatives to Airbnb.

Thousands gather as the Queen lies in state at Westminster Hall