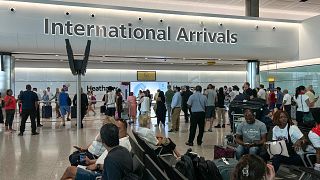 The UK is planning to implement “contactless” border crossings in UK airports from 2024, according to Home Secretary Priti Patel.

So what does this mean? It will allow some passengers to enter the country without using an electronic passport gate or speaking to a Border Force officer. Instead, they may have to upload a photo of themselves and submit it to the Home Office before they travel.

The scheme is intended to reduce queues at the border, “helping to speed up legitimate journeys to the UK”.

Travellers will undergo “pre-screening” says the government, allowing them to be “identified at the border using the latest technology.”

“As Home Secretary I have been focused on taking back control of our immigration system through my New Plan for Immigration,” Priti Patel said.

“This includes ensuring we have a border that is fit for the 21st century which allows travellers to get a visa and pass through the border easily, while maintaining national security.”

Facial recognition technology could be used to make these “contactless corridors” possible, British newspaper The Times reports. It would require international travellers to submit biographic and biometric details, like photos of their faces through the new Electronic Travel Authorisation (ETA) scheme before they fly.

What is the UK's new Electronic Travel Authorisation scheme?

As part of a plan to transform the UK Border Force, the Home Office intends to introduce a ‘Permission to Travel’ scheme from 2023. Everyone wishing to visit the UK will need permission before they travel.

UK and Irish passport holders won’t need to do anything but everyone else will need to apply for a visa or ‘Electronic Travel Authorisation’.

All visitors who don’t currently need a visa to enter the UK, including those from the EU, will have to apply for an ETA which could cost around £18 (€21). A document detailing the Home Office’s plan says they will have to provide biographic, biometric and contact details and answer a short set of “suitability questions”.

This is not a visa - but will allow an individual to board a flight to travel to the UK. It will be similar to the US Electronic System for Travel Authorisation (ESTA) which was introduced after the 9/11 terror attacks.

The scheme is due to be trialled from March 2023 with visitors from Kuwait, Qatar, the UAE, Saudi Arabia, Oman and Bahrain. It could be introduced for the rest of the world before the end of next year.