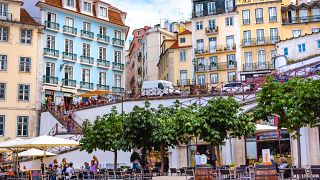 The remote working trend is showing no signs of slowing meaning now is a great time to try living in another country.

Choosing a country well-suited to remote working and your lifestyle is essential, though. To help you decide, InterNations has carried out its annual Expat Insider survey on expat destinations around the world.

The global community for people who live and work abroad talked to 11,970 expats representing 177 nationalities and living in 181 countries or territories.

What are the best European countries to live in right now?

The Expat Insider 2022 report looks at 52 expat destinations around the world and ranks them according to the quality of life for expats.

The survey asked expats about the ease of settling in, working abroad and personal finances where they lived.

Surprisingly, just two European countries made it into the top ten this year.

Portugal is the best destination for expats in Europe

Portugal comes in fourth in the overall rankings for best global expat destination, particularly for its sunshine and good social life.

Nine out of ten expats surveyed said they enjoy the climate and weather while 89 per cent were happy with the air quality. Expats like the opportunities for playing sport and 93 per cent said it’s easy and safe to get around on foot or by bike.

Those surveyed also said it was easy to make local friends and have an enjoyable social life. One expat from Germany commented that “people are friendly and open.”

However, more than half of expats asked said they find it hard to deal with the local bureaucracy.

They also said they were unhappy with the local job market and career opportunities. As such, Portugal drops to 35th place in the Working Abroad index.

Overall, though, 85 per cent of expats said they are happy with their life in Portugal.

Although coming in fifth in the overall rankings, Spain was voted top expat destination for quality of life.

Those surveyed said they loved the variety of culinary and dining options on offer, the opportunities for sports and the culture and nightlife.

“I enjoy the social freedom and culture in Spain. There is a great nightlife,” commented one expat from Australia.

Spain also ranked high for climate and weather, beaten only by its neighbour Portugal.

The affordability of its healthcare system is a highlight for expats - almost four out of five rated it positively. Of those surveyed, 77 per cent said that they can access all the kinds of healthcare services they need.

Although Spain doesn’t quite make it into the top 10 in the Personal Finances index, 70 per cent of those surveyed are happy with the cost of living, compared to 45 per cent globally.

Like Portugal, however, expats expressed dissatisfaction with personal career opportunities and the lack of fair pay.

Popular expat destination France received a poor ranking in the 2022 survey only coming 31st out of the 52 destinations.

Though the country performs well in the Quality of Life index in 11th place, expats expressed problems with language. Three in five expats say that it is difficult to live in France without speaking the local language, nearly double the global average.

France also ranked in the bottom 10 in the Admin subcategory. “All administrative stuff is very complicated. The system is outdated and slow,” said a Lithuanian expat.

Expats praised the country’s health system, however, with 84 per cent of expats in France happy with the affordability of healthcare, compared to only 61 per cent globally.

“I love the access to very good services such as healthcare, aids, and public transportation,” commented one Italian expat.

Despite its reputation for la dolce vita, Italy ranks in the bottom 10 destinations for expats in the InterNations survey.

Italy recently announced a new digital nomad visa to make it easier to work from the country. But it still comes in at 44th overall in the survey with expats finding it particularly hard to deal with the local bureaucracy and to open a local bank account.

The country also lands among the bottom 10 in the Working Abroad index, where 29 per cent of expats do not feel fairly paid for their work compared to 20 per cent globally.

Nearly half of those asked also said they are unhappy with the local job market.

The country performs much better in terms of the ease of settling in, with 68 per cent finding it easy to get used to the local culture compared to 62 per cent globally.

Expats also enjoy the climate and weather as well as the culinary variety and dining options.

Which European countries are worst for expats?

Luxembourg also ranks in the bottom 10, criticised for its lack of leisure activities and high cost of living. 42 per cent of expats are unhappy with their social life compared to 26 per cent globally.

Malta, too, performs badly with expats unhappy with the infrastructure for cars, the urban environment and the availability of industries that produce goods or provide services that benefit the environment.

69 per cent of expats also found it hard to open a bank account compared to 21 per cent globally.