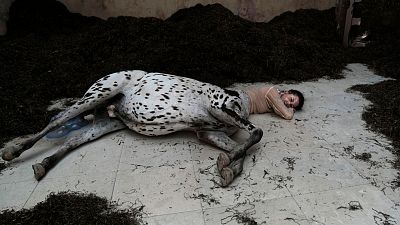 A view of an installation part of "We Walked the Earth" by artist Uffe Isolotto at Denmark's pavilion during the 59th Biennale of Arts exhibition in Venice, Italy.   -   Copyright  AP
By Shivan Sarna  with AP  •  Updated: 28/04/2022

The 59th Venice Biennale has a resounding theme of darkness and strength in face of adversity.

One of the most important events in the art world opened in late April after being delayed due to the pandemic.

The Nordic Pavilion has been renamed the Sámi Pavilion for the first time. It aims to celebrate the art and sovereignty of the Indigenous Sámi people who live in Nordic countries and Russia’s Kola Peninsula.

"The wonderful thing about the Venice presence for the Sami this year is that the Nordic Pavilions have joined in giving the Sami room instead of having a separate Norwegian, a separate Swedish and a separate Finnish pavilion,” says Harald Gaski, a professor at Sami University of Guovdageaidnu Norway.

“They have all agreed to give space to the Sámi so actually, this is a new notion or nation.”

Co-Curator Liisa-Ravna Finbog says the Sámi have been fighting for their rights for centuries. Now the world is turning to them for answers on how to survive.

"People in general are understanding that we may be faced with the apocalypse in a global setting, climate changes, wars. There are places in the world that haven't seen rain for decades, and so what do you do when you reach a point that you have never been to before?” she explains.

“You of course look to the people that have lived there for a millennium or for centuries because we have in a way discovered how to live within the apocalyptic world and do it while maintaining our spirits.”

What can be seen at the Belgian Pavilion?

The 2022 Biennale also serves as a reminder of humanity’s most resilient state, childhood. In the Belgian Pavilion, artist Francis Alÿs depicts children playing in films and paintings.

“When children play, they really are into the game, they forget everything that is around them,” says Hilde Teerlinck, curator of The Nature of the Game exhibit.

She adds that children can neutralise the outside world, even in the most difficult of situations. They are completely in the game, playing together and expressing their feelings.

Children, Teerlinck says, “somehow give a sense to reality in this time that has sometimes lost direction and lost sense.”

What else stands out at the 59th Venice Biennale?

The main exhibition at this year’s Biennale is titled the “Milk of Dreams” from a book by Leonora Carrington. This is “a magical world where life is constantly re-envisioned through the prism of the imagination,” writes Cecilia Alemani, curator of the event.

“It is a world where everyone can change, be transformed, become something or someone else; a world set free, brimming with possibilities.”

The installation at the Danish Pavilion is set in the future, where humans have transformed themselves into centaurs.

"It's a response to the world situation as it is. I began this project before COVID, before the war in Ukraine, but it sort of developed over time,” explains the artist behind the piece Uffe Isolotto.

“I incorporated some more darkness into it because it was more balanced between light and darkness to begin with. So it's very much a gut feeling from me but also addresses your gut feeling when you visit."

The Venice International Art exhibition opened on April 22 and runs until November 27, 2022.

Watch the video above to see some of the pavilions at the 59th Venice Biennale.