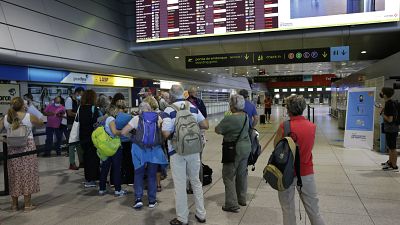 Portugal has started fast-tracking UK travellers at its airports, allowing Brits to avoid long queues when they enter the country.

By opening their e-gates to British travellers, Portugal is sending a message that it does not intend to prioritise EU tourists at the border, defying Brexit rules in the process.

Since 31 January 2020, new travel rules have been in place as the UK is no longer part of the European Union. The main stipulation is that British passports must be checked manually, instead of electronically, meaning longer queues.

But at this month’s 'World Travel and Tourist Council' summit in the Philippines, it was revealed that passport e-lanes for Brits had been set up in airports in Faro, Lisbon and Porto in mainland Portugal, and at Funchal in Madeira.

British travellers made up the majority of overseas visitors to Portugal in January and February this year, booking nearly 484,000 hotel overnights over the two months, according to the Telegraph.

The electronic gates are thought to be available to visitors from Australia, New Zealand, Singapore and Japan too.

This should “provide increased accessibility for our valued British travellers, as we head into the busy summer period,” Luis Araujo, the president of Turismo de Portugal, told The Telegraph.

"We're delighted to have made travel to Portugal even more seamless for those able to make the most of the new e-gates."

Travel insight expert Paul Charles added that this could lead to a domino effect with other countries.

Portugal is the first country to abandon the EU’s Brexit rules of manual checks for UK citizens. Other countries that depend on UK tourists, like Spain and France, may follow suit to boost their inbound travel numbers.