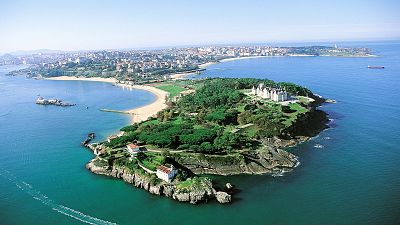 Despite possessing an enviable location in the Bay of Biscay, some of Spain’s best surfing beaches and a thriving culinary scene, Santander has still gone under the tourist radar.

As the capital of the autonomous Cantabria region, on the north coast of Spain, the city of 200,000 has an atmospheric old town - although many of its medieval buildings were destroyed in a massive fire in 1941.

A beautiful bay with views of rolling green hills and mountains lies on the opposite side of the shore. Unlike the honeypots of Madrid and Barcelona, the city centre is compact enough to walk around, and in the summer months a cooling breeze blows in off the Bahía de Santander.

On a balmy visit in early March, a friend and I seemed to be the only tourists in town and didn’t hear another non-Spanish voice all week.

Where to get tapas on tap

Santander is famous for its tapas, or pinchos as it’s known locally (sometimes spelled pintxo or pinchu) - meat, fish, goats cheese and other ingredients spiked onto a piece of crusty bread with a skewer or toothpick.

You’ll find pincho bars and bodegas dotted all over the city. A good pit stop for lunch is Casa Lita, an unassuming-looking cafe bar overlooking the bay, with indoor booths and an outdoor terrace. It serves a mouthwatering array of bread-based snacks, raciones (sharing plates) and palatable house wines at around €2.50 a glass.

Plaza Cañadio is the place to kick start your evening, bearing in mind that nightlife in Spain doesn’t get going till around 9pm. The central public square is flanked by bars and restaurants, including Cañadio, a local pincho institution that gets consistently good reviews in most of the tourist guides.

A tuna tataki starter melted on the tongue and Iberian pork with homemade chimichurri and roasted aubergine was as soft and fluffy as a marshmallow.

Our meal here was slightly underwhelming though and if you only speak beginners Spanish you’ll struggle with the monolingual menu despite the waiters’ gallant attempts to translate it. We were slightly disappointed when our juicy gambas turned out to be tiny shrimps buried in an omelette.

A better bet for out of towners is La Bodega Riojano, an atmospheric taverna with flag-stone floors, crisp white tablecloths and mahogany wine barrels hung on the walls.

There’s a comprehensive choice of meat, seafood dishes and Cantabrian cheeses: a tuna tataki starter melted on the tongue and Iberian pork with homemade chimichurri and roasted aubergine was as soft and fluffy as a marshmallow. Mains start at around €14, wines at €3.

What are the best museums to visit?

Opened to great fanfare in 2014, Centro Botin was designed by award-winning Italian architect Renzo Piano and is Santander’s premier arts and cultural hub.

Overlooking the bay, the high-tech venue hosts year-round exhibitions, screenings and concerts by artists from Spain and around the world. Also on the shoreline, the Museo Marítimo del Cantábrico is a great place to while away a couple of hours.

Charting the region’s seafaring history over four floors, the museum contains intricate models of ships and reconstructions of cabin quarters, as well as an aquarium with stingrays, small sharks and moray eels. The skeleton of a 24-metre-long, 60-tonne fin whale, suspended from the ceiling, is the star attraction.

Find a secluded home away from home

If you want bars, restaurants and shops on your doorstep, choose a hotel in the middle of town rather than by the El Sardinero beach, a good 30-minute walk eastwards.

NH Cuidad on Menéndez Pelayo has smart, modern rooms (4th-floor rooms have balconies), with doubles from €60.

Tucked away down one of Santander’s narrow side streets, the family run Jardín Secreto is a characterful 19th-century townhouse, revamped as a boutique hotel. As its name suggests, it also has a garden. Doubles from €70.

For beachside bliss, the Gran Hotel Sardinero overlooking the golden sands of Primera Playa del Sardinero is a 5-minute bus ride away from the centre. The palatial early 1900s’ exterior gives way to a chic, contemporary interior and neutrally decorated rooms.

From €85. Prices for most hotels rise considerably in high season.

A day out in nature

The only park of its kind in Spain, the government-run 750-hectare nature reserve is 17km south of Santander, located in an old open-air iron mine that’s been repurposed to home 100 animal species.

You can see everything from rhinos, wallabies and gorillas to the endangered Cantabrian brown bear - as well as gorges, lakes and rock formations.