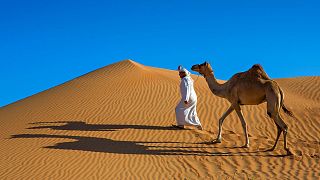 Best known for its vast ochre deserts, Bedouins on camels and the largest oasis in in the world, there is plenty to do outside of the desert in Saudi Arabia.

Now is the perfect time to book your trip here too, as the Kingdom has just scrapped most of its COVID-19 restrictions, including social distancing. Though you must be fully vaccinated to visit, you don't need to provide a negative test.

So if you're planning a trip to Saudi Arabia in 2022, where should you go?

While the Red Sea is ideal for spring sun, you can camp beneath the stars in Saudi's national parks, or maybe even see the snowfall in the cooler mountainous north.

"Saudi has always been that black box and it's now ready to welcome visitors with open arms," says Fad Hamidaddin, CEO of Saudi Tourism Authority,

"From those looking for an authentic, cultural experience to adventure. I believe Saudi is the most welcoming, hospitable place in Arabia. After all we have been the land of crossroads of civilisations," he adds.

AlUla is home to Saudi Arabia’s first UNESCO World Heritage Site in the northwest of the country.

Featuring 7,000 year old tombs and stunning canyons and natural rock formations that offer a range of adventure sports options. Here you can see "the footprints of those civilisations left for us to enjoy and visit," says Hamidaddin.

The Red Sea offers "unparalleled coral reefs and marine treasures and unique species that people can enjoy even in in winter."

Salwa Palace in Ad Diriyah is the the original home of the Al-Saud royal family. Located northwest of the capital Riyadh, it features four museums alongside the recently restored palace.

Diriyah’s historical centre is the UNESCO-listed site of At-Turaif, which was founded in the 15th century. Set to open late 2021 the site is being redeveloped to include luxury resorts and to allow visitors to walk through the ruins for the first time.

"Finally, you have the highlands of Asir (in southwestern Saudi Arabia) with lush green mountains that are are the highest in the Middle East," says Hamidaddin.

For snow you can try the mountainous north where you can saddle up an Arabian camel or go on a mountain drive from the town of Tabuk. There you can also go sledging or try camping inside a traditional Arabic tent, known as a kashta for the ultimate winter experience.

"We have a lot to offer. It's a very diverse landscape, topography, culture, but the best remains, I think, the hospitable and welcoming nature of the people," says Hamidaddin.

Where should first-time visitors go?

Hamidaddin says first-timers should "definitely visit the cosmopolitan capital of Arabia, Riyadh with its mix of lively souks, and ancient architecture, alongside its contemporary high-rise buildings, museums and galleries.

The ancient port of Jeddah with its historical quarter, Al Balad and the Red Sea coast, contrasts with with the city's luxury hotels and its big events, such as the Red Sea International Film Festival, which takes place in late winter. The famous sea food dishes from the Red Sea should also not be missed.

When should I go to Saudi Arabia?

"We have golden dunes in Arabia, but if you go in summer, the whole region is in the 40s and 50s. The south of Saudi is 20 degrees less. So it's a beautiful summer destination," says Hamidaddin.

The winter and spring months are an ideal time to visit Riyadh. Although average high temperatures in the summer can reach 44 degrees C, the top temps in December and January are in the low 20s, reaching the high 20s in February and March.

Why is Saudi Arabia investing in tourism?

According to Hamidaddin, 70 per cent of the population of Saudi Arabia are below the age of 35. "This is an opportunity, but it's also a possible threat if unemployment is not addressed".

With technology "stripping away jobs" from all other sectors Hamidaddin believes tourism is by far the greatest creator of new employment.

"For most of the top 20 destinations around the world, tourism contributes to a minimum 10 per cent of their total GDP."

"For Saudi today, tourism only represents 2.5 of its contribution, so the potential is massive."

"Add that to ambition and empowerment. Because we are the largest investor in tourism in the world, there is no country that is investing in tourism like we are in terms of the dollar and in terms of commitment into new innovative projects."

Watch the video above to see more of Saudi Arabia.