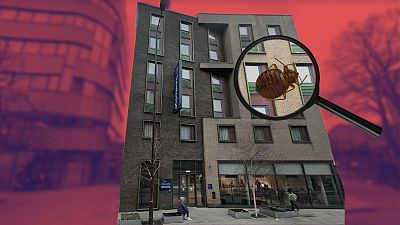 It’s the stuff of nightmares. You check into your hotel room late at night, climb into bed and snuggle down into crisp white sheets ready for a good night’s sleep, only to find a dead-eyed bedbug staring at you over the top of the duvet cover.

Luckily, for Bethan Edwards and her partner, who had booked a two-night stay at Travelodge London Finsbury Park, in early February, it never got that far.

Bethan says she spotted one of the gruesome creatures sitting on the bed cover before they’d even unpacked and went downstairs to report it to reception, armed with photographic evidence.

“It was disgusting,” says Bethan, who was offered another room, but declined.

“We didn’t feel comfortable staying at the hotel after that and didn’t want to risk finding an infestation. We asked for a refund but the member of staff on reception said he couldn’t give us one.

"We had to leave at 1am to find somewhere else in the area, costing us more than double what we’d already paid.”

What are bed bugs?

Dark orange in colour, bedbugs are about the size of an apple seed and hide away during the day under mattress seams and skirting boards, in bed frames and electrical switch plates. They crawl out at night while you sleep to gorge on your blood, attracted by your body heat and carbon dioxide emissions.

The nocturnal ghouls inject an anaesthetic into your skin so you won’t feel anything while they feast and their bites can take a few days to develop. Once they do they will itch like crazy and, while not dangerous, can become infected if you scratch too much.

As if that wasn’t bad enough, the psychological impact of a bedbug presence can cause severe anxiety, depression and paranoia.

Unfortunately for travellers, bedbugs, or cimex lectularius to give them their official name, are easily transmissible and are extremely hard to get rid of once an infestation has taken hold.

As well as hotels (five star or seedy motel, they are no respecter of status), you can pick them up on public transport, in offices and communal apartment blocks.

They can’t fly so they rely on humans for transportation and will happily hitch a ride in your suitcase, purse or wallet while you remain blissfully unaware.

Bedbugs were common in the UK a century or so ago but their numbers were greatly reduced by the use of insecticides such as DDT, now illegal.

Since then, the wily bugs have developed a resistance to chemical treatments, making their eradication harder.

A decade later, in France, the government launched a “bedbug hotline” in response to a major comeback of the blood-sucking menace.

How to avoid a hotel with bed bugs

Adam Juson, co-founder of Merlin Environmental Pest Control Company, is one of the few people in the UK to train sniffer dogs to track down bedbugs. The clever canines can pinpoint a single bug in a hotel room, laundry area or even in a vacuum cleaner.

The best way to avoid picking up one (or more) of the nightmarish beasts in a hotel is to read the reviews before you book a stay, says Adam.

“Make sure guests aren’t reporting bed bug problems and stick with reputable hotels and guest houses. Many of them hire pest control companies to screen for bedbugs on a regular basis rather than waiting for guests to report a problem.

"You can also check with hotel management to ask if they carry out screening if you’re in doubt.”

Other ways to minimise risk include using the luggage rack rather than the floor to store your suitcase and checking the mattress and bedding for telltale signs: blood spotting from crushed bugs, as well as rust-coloured and black ink spots, otherwise known as bedbug poop.

A spokesman for Travelodge said, ‘‘we conducted a comprehensive investigation using an independent specialist company.

"Their findings confirmed that there was no evidence of bedbugs in the room that Miss Edwards stayed in. We have shared this report with Miss Edwards.”

The company has since offered Bethan a full refund and an apology.