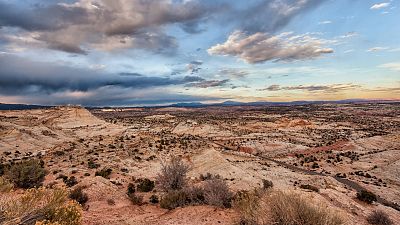 Looking back at history, it is fair to say if it wasn’t for the railroads, the United States would not have grown and prospered so quickly. Railroads effectively restructured the physical, social and economic foundations of the country as they were created.

Today’s passenger trains have to give way to the freight trains, some of which can be up to two miles long.

However, from a US tourism perspective, travelling by train opens up a world of opportunity and discovery that one would never experience on a plane.

There are a number of cross-country routes that traverse East to West and North to South across the country. Each has their own character, moulded around the stops along the way.

One of the most famous is the Southwest Chief, which completes the 2,200 mile, 43-hour journey from Chicago to Los Angeles.

Chicago’s Union Station is a fitting place for this train journey to begin. Another famous trip, Route 66, which is somewhat mirrored by the Southwest Chief, starts a few blocks away. The building oozes history and, upon entering, I imagine the many millions of people who have started journeys there over the years.

As with many American buildings, Chicago’s Union station seems oddly familiar, but it is no surprise given the number of movies that have been made there, the most famous being the stairwell shootout scene in The Untouchables.

From my perspective, as a traveller whose home rail service is relatively small, the sheer size of the train itself takes my breath away. The gleaming silver carriages seem to go way into the distance down the platform. As the train departs, I quickly find my couchette, which is to be my base for the two nights on board, and wander off to get my bearings.

I very quickly claim a seat in the Observation car, with its huge windows and coffee bar, in order to be able to drink in as many of the views as I can. I am well aware that with scenery from the Midwestern countryside to the deserts of the southwest and finally the Tehachapi Mountains of southern California, there is lots to see. Armed with my guidebook, I eagerly await how the journey would unfold.

We pass herds of buffalo, wild deer, huge ranches and even ghost towns. I see houses literally in the middle of nowhere…

While the journey is 43 hours, there are many stops along the way where you can disembark and stretch your legs, or buy local crafts from trackside sellers. A word of advice might be to keep one eye on the train guards at these stops, as you don’t want to miss their boarding signal and find yourself left behind at a random rural location, miles from civilisation…

The 24 hours until the next train comes along could be a long wait!

As the journey progresses, we pass herds of buffalo, wild deer, huge ranches and even ghost towns. I see houses literally in the middle of nowhere, many many miles from their nearest neighbour and others with most of their possessions left outside - simply because it had been eight months since the last rainfall.

When train chat gets interesting

Conversations start easily on the train, particularly when dining or in the observation car. I get talking to a middle-aged lady who boards in Kansas City. Some seven hours afterwards, as we leave Dodge City, the setting of numerous Wild West movies, the plains of Kansas start to give way to the foothills of the Colorado Rockies.

My curiosity gets the better of me and I ask her why this was such a surprise. Her answer is that this is the first time she had ever left Kansas. Further discussion ensues with others around us and the general consensus is Kansas is so flat that the highest point in the state, known as Mount Sunflower, is a barely noticeable rise in a field in a rural ranch near the Colorado border.

On hearing that my fellow passenger is travelling to Los Angeles, I soon realise that she would soon be seeing the ocean for the first time in her life.

I soon realise that she would soon be seeing the ocean for the first time in her life.

In the lounge car, you cannot help but overhear conversations as the journey continues. I listen in as two seasoned train travellers from New Mexico and New York compete with each other to tell the best journey horror story, from eight hour delays to tricky travellers they had met along the way.

I meet a couple who are travelling to meet their first grandchild and another who are moving lock, stock and barrel from one side of the country to the other.

The sights and sounds from a rail carriage

The Southwest Chief follows Route 66 in part - and also the Santa Fe Trail. Between Colorado and New Mexico, the trains pull the carriages over the Raton Pass. Here there is a marked change in the style of buildings and the landscape as mountains give way to a desert before arriving in Albuquerque.

The scenery changes again through Arizona, famous for its 12ft tall cacti and stops including Winslow, AZ where a street corner is now a rock and roll landmark.

The final 12 hours of the trip mostly traverse California with stops along the way including San Bernadino, the location of the original McDonalds restaurant, on the final run into Los Angeles.

Much like many places in LA, Union Station has been used as a movie location in hundreds of movies so that odd familiarity returns as I step off the train and into the morning sunshine.

Having seen the start of Route 66 in Chicago two days before, it is only right that I make my way to the end of the road at Santa Monica Pier. As I gaze out to the Pacific, I have time to contemplate my previous 50 hours, all the places I have seen and people I have met.

I could have flown to the city in around four hours, but at 35,000 feet, all you can do is sleep, read a book or watch a film. My experience was so much richer - and I’ll be doing it again soon.