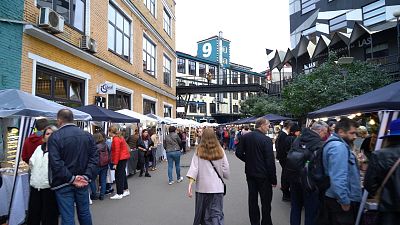 In early autumn Moscow is an inspiring place to visit. This time of year gives a special charm to one of Moscow’s most romantic corners – Patriarch’s Ponds.

Patriarch's Ponds is in the affluent residential area of the Presnensky District. Contrary to what its name suggests, it is actually only one pond but over 200 years ago it is assumed that there were more. The pond today covers just under 1000 square metres and its depth is around two metres. This popular spot became world-famous when Mikhail Bulgakov described it in one of Russian literature's best-loved novels: 'The Master and Margarita". This book was written during the Soviet era and the pond was one of its main settings. For a romantic stroll in the open air, the pond and its surrounding areas are a must-see. It also becomes an ice-rink during winter and is home to swans during the summer.

Moscow's cultural hotspot called 'Artplay' is housed in a converted pressure gauge factory. It's the place to go if you are interested in art and design. This Autumn, Zorikto Dorzhiev’s 'The Patchwork Man' exhibition is in the spotlight. It explores the theme of modern life in big cities and how theborder between fact and fiction, private and public, external and internal, is blurred to everyone.

Dorzhiev describes Moscow as the most vivid illustration of the patchwork concept because "it is a city of contrasts, where old and new are combined, where new colors and shades are born." To him, Moscow makes you feel like you're in the centre of the world and you can feel the world's pulse there.

The artist works in easel painting, graphics, sculpture, book illustration, animation, digital art and cinema. His exhibitions have been held in many countries around the world.

Traditional Russian food is not the most well-known cuisine around the world but it does have many mouth-watering treats. At Uhvat restaurant, you get to discover the combination of Moscow's old and new, that Dorzhiev so aptly described, all by yourself. The head chef there, Viktor Beley, has a modern take on some of Russia's most traditional dishes. He has studied the ancient technique of stewing and learnt about the Russian art of baking, reviving forgotten cooking methods for a contemporary diner.#

A good example of this is his version of varenets, a traditional Russian sweet dairy drink. It's a dish that many remember their grandmothers making, but few imagine in the splendid way that Beley has.