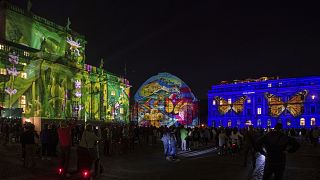 The 17th annual Berlin Festival of Lights returned to the German capital earlier this month, shining a new light on the city.

The festival is known for its illumination of key landmarks throughout Berlin - including the Siegessäule, Reichstag, Brandenburg Gate, Berliner Dom, and many other sites around the city.

This year attendees of the festival were treated to light shows, projections and video art at 70 different locations across the city.

The inaugural festival took place in 2005 and today it is considered one of the most successful light shows in the world.

The Festival of Lights is one of Berlin's most successful annual events, attracting over a million tourists every year.

For 10 nights Berlin's most iconic landmarks were brought to life in one of Europe's largest open-air art shows.