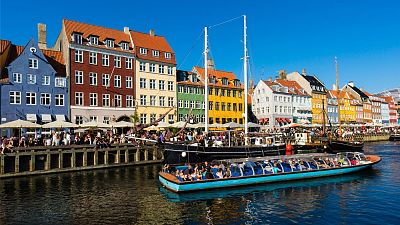 Culture and entertainment magazine Time Out has ranked the world’s coolest cities, according to feedback from nearly 30,000 urban dwellers across the globe.

“We were after the cities that were not only thinking about the now, but also the future. The ones making life better both for us and for our grandkids,” said the publication.

As Time Out points out in its ranking, wearing masks was cool in Tokyo well before COVID-19 hit the world. According to the research, life really slowed down in Japan’s capital at the start of the pandemic.

During the past 18 months, the city has made huge investments into new venues and attractions for locals and visitors. One of the more recent movements is ‘designer public toilets’ - state-of-the-art bathrooms made to look like art installations.

Is there a prettier city to be locked down in than Porto?

The iconic architecture made for some colourful bouts of daily exercise, and Porto’s famous graffiti artists have been hard at work on the quiet streets. Much of the city was pedestrianised and more cycling infrastructure was added, as well as community gardens springing to life to give residents some much needed outdoor space.

Tel Aviv ranked in the top 10 because the ‘city that never stops’ paused when COVID struck.

When Tel Aviv is fully open, it’s home to lots of vegan restaurants and a bustling nightlife scene too.

Known as the ‘Golden City’, it’s full of tourist hotspots including Charles Bridge and Old Town Square. In the Prague 6 borough, there’s a host of all-year round playgrounds for outdoor pursuits which made lockdown that bit more bearable for local residents.

Montreal, and Canada as a whole, is known for its friendly people - who rallied together throughout the worst of the pandemic in a great show of community spirit.

When asked what one thing other cities could learn from Montreal, resident and Time Out journalist JP Karwacki said, “The ambition to plough ahead with a wealth of innovative green projects, like plans to ban single-use plastics and transform downtown boulevards into urban forests."

Infamous New York, New York was voted the ‘most resilient’ of all North American cities in the wake of COVID-19. We don’t need to outline the plethora of reasons to visit the world’s most iconic concrete jungle, but its handling of the pandemic - all the while navigating a population of 8 million - was highly commended by the Time Out board.

The city is still operating an Open Restaurants scheme, which saw the streets transformed into vibrant social hubs, and a popular vaccination programme encouraging people to get jabbed.

Denmark has long been known as one of the happiest places in the world. Along with the high quality of life and green city initiatives, its fundamental values of hygge make it a positive place to be.

In the poll, 66 per cent of Copenhageners called their hometown ‘relaxing’.

The UK’s second city beat the capital in this year’s ranking for its buzzing culture and community spirit.

During the pandemic, small businesses like Result CIC offered free mental health support to frontline workers and the Eagle and Child pub gave out 4,500 free meals to the vulnerable.

Of all the cities involved in the survey, it was voted top for ‘nightlife’, ‘creativity’, ‘community spirit’, ‘friendliness’ and ‘getting to know your neighbours’.

A city centred on its unique culture and social life, Amsterdam suffered badly when lockdown hit. According to the Time Out study, however, the time was spent wisely.

The results state that Amsterdam has been “focusing inwards on its famous beauty, history and community spirit – while vowing to do away with the coffeeshops, brothels and drunken debauchery that so blighted its historic centre.”

In at number one and representing the west coast is San Francisco, one of the US’ most famed cities. It also had one of the strictest responses to COVID in an effort to keep its community safe.

The SF New Deal was designed to help those in need by putting the city’s chefs to cooking for the vulnerable. The many parks dotted about San Francisco made for a quiet, green space for those stuck indoors. And of course, the year-round good weather helped to keep spirits high.

Tell us why your city should have ranked @euronewstravel.