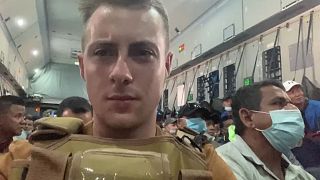 The UK student who entered Afghanistan for a holiday last Friday has been successfully evacuated.

Miles Routledge, 22, caught the internet's attention this week after posting on 4chan, Facebook and Twitch about his journey.

Today he was evacuated to Dubai "thanks to the brilliant people at the British army". The physics student shared a video of himself on board what appears to be a military aircraft, filled with other evacuees.

"The Taliban let us go through the airport and we met many of them, very long transition period but everyone was smiling and waving at one another, some took selfies with them," Routledge wrote in a Facebook post on Tuesday morning local time.

He had been planning the trip since at least May, after researching the 'top 10 most dangerous places in the world.'

“I kind of thought, what’s the most fun country I could go to that isn’t boring, as in, there’s some excitement in there and it’s different,” Routledge told his followers over the weekend on the video streaming platform Twitch. “I don’t want to go to London or even Spain.

This isn't the first time Routledge has visited an infamous destination, two years ago he travelled to the site of the Chernobyl nuclear disaster. He says this made him want to try more 'dark tourism'.

"If I tried to sunbathe on a sandy beach, I'd just hate it," he told Input Mag.

Still, Routledge wouldn't have been able to predict quite how dangerous his travel was going to be. At the time he booked his trip, spending around €1,280 on flights and a visa, Afghanistan was considered relatively safe.

“There were no Taliban in the area. People were going all the time — YouTubers,” he told Input, “I thought: ‘Why not, I’ll just do what they’re doing.’ However, it didn’t play out that way, as you can tell.”

Like many tourists to the region, Routledge was driven by the desire to see a country that's been so prominent in international affairs for the last 20 years.

“I wanted to see what life was like here, and how it was different. It was a curiosity. It’s always been on the news since 2001.”

For his next travel adventure, Routledge has said he would like to visit North Korea.