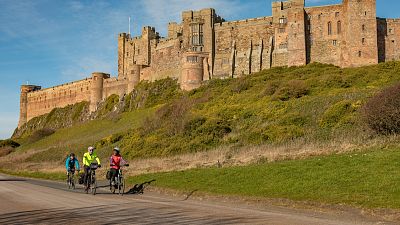 Whether you’re a keen cyclist or just getting started, this route through England and Scotland is one of the best.

Starting in Newcastle, the Coast and Castles route takes you up the Northumberland coast before crossing the border into Scotland and turning inland. From there you explore the Moorfoot hills, before arriving in the centre of Edinburgh, Scotland’s capital.

Newcastle-based cycling holiday specialists, Saddle Skededdle offer trips all over the world but one of their finest offerings can be found much closer to home.

What makes this route so special?

The trip follows a section of the North Sea Cycle Network aka the EuroVelo12 and is considered one of the most accessible multi day-cycle routes in the UK.

The 5-day tour has guided or self guided options and is packed with sights of interest, including several impressive castles, award-winning beaches and cute seaside towns.

The first beach and castle you’ll arrive at is in Tynemouth, just outside of Newcastle. Its Blue Flag beach Longsands and the Castle and Priory are a great way to start the trip.

From there you’ll pass through several more beaches including the 11km long Druridge Bay before entering the Northumberland Coast Area of Outstanding National Beauty (AONB).

Voted as one of the UK’s most beautiful beaches, Embleton Bay is overlooked by the dramatic ruins of the 14th century Dunstanburgh Castle.

Further up the Northumberland coast, cyclists will discover Bamburgh Castle. Built in the 11th century and now a fully restored residence, this is quite possibly the UK’s finest coastal castle. Bamburgh receives over 160,000 visitors per year and was recently used as a filming location in the upcoming Indiana Jones film.

Continuing north, Lindisfarne Castle is a great stop for those interested in Viking or Christian history. It is located on Holy Island which is only accessible by a tidal causeway.

The monastery at Lindisfarne was the preeminent centre of Christianity in the kingdom of Northumbria. It was here that the Vikings first raided in 793 which led to the beginning of the Viking era in the UK.

The last town before the Scottish border and before the cyclists turn inland away from the coast is Berwick Upon Tweed. A settlement was first established here during the Anglo-Saxon era and the town has highly turbulent past filled with battles and raids as it moved between English and Scottish occupation.

Your final destination is Edinburgh. Its stunning castle sits on a crag high in the centre of the city. Though now famed for its annual Fringe comedy festival, Edinburgh also has a fascinating and sometimes gruesome history.

Who is this route suitable for?

The Coast and Castles cycling holiday is suitable for all ages and abilities. The route is a combination of traffic-free cycle routes, quiet country roads and a few short off-road sections.

“We can organise it so that it's shorter for the quicker people or it takes a few days longer for family groups or those who want to take the time and explore a little more,” says Francis King, one of Saddle Skedaddle’s cycling guides.

“Customers can expect us to make sure they get to where they need to be going, do it safely and have a lot of fun doing it. We’ll also make sure they stay fed with our famous skedaddle picnics.”

Watch the video above to learn more about the Coast and Castles cycling holiday.

Please note some of the footage included has been sourced from additional regions not visited on the official Coast and Castles cycling route.