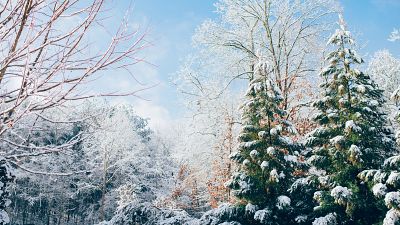 Unbelievably, it’s that time of year again. We won’t say ‘the most wonderful time’, because for many this year, the reality of Christmas is a bit more ‘bleak midwinter’. The good news though: 2020 is officially nearly over.

To recap a few of the current Christmas restrictions in brief: as it stands, in France a maximum of six people (children not included in this number) can gather around the same dinner table to see in Christmas. In Italy, a traffic light system limits where people can travel to. Australia is maintaining its travel rules for the festive period, and in the UK, a new strain of coronavirus means the island is facing some of its toughest restrictions yet.

After what’s been a categorically traumatising year, the latest COVID-19 updates mean many people will be spending Christmas away from their loved ones; some even completely alone.

However, we’re looking to brighter times ahead. Here, we’ve wrapped up some of our favourite Christmas traditions from around the world.

Day of the Little Candles, Colombia

On 7 December, Colombians traditionally light candles in their homes, churches and squares. It’s a nod to the deep Catholic roots of the country, and symbolises Pope Pius IX defining the date as the immaculate conception of the Virgin Mary.

More recently, it’s become a day in the calendar when towns and cities turn on their Christmas lights: the official beginning of festivities.

Optalek, or ‘the Christmas wafer’, is a way for Polish families and friends to share memories of the past year and wish each other well for the year ahead.

Before sitting down for Christmas Eve dinner, many families from Poland and other eastern European countries take part in the tradition.

It’s believed that the sharing of unleavened bread (bread baked without any raising agents) with other people is to share the good in life.

Krampus is an alarming-looking creature who emerges during Austrian advent.

Deemed the anti-Santa, he threatens to take naughty children away to his lair by stuffing them in a sack.

According to folklore, Krampus shows up in towns the night of 5 December, which is known as Krampusnacht.

The eve before 12 December, Icelandic families will leave a shoe on their windowsills for the Yule Lads.

There it will stay for 13 nights, so the 13 Icelandic Santa Clauses (the Yule Lads) can leave a small gift.

This too was originally a religious celebration which took place during the nine day novena - a series of prayers recited before Christmas. Before the midnight mass on Christmas Eve, lanterns were brought to the town church.

The Yule goat is a Scandinavian and northern European symbol, believed to help Santa Claus deliver presents. Apparently, sometimes Santa might opt for goat-back instead of his usual sleigh method.

In the town of Gävle, Sweden, a giant Yule goat as a means of decoration for the main square seemed like the perfect idea. However, opting to build it out of straw and wood means that locals trying to burn the goat down has become as much a tradition as the original concept.

It’s reported that in the last 50 years, the Gävle Yule goat has only survived until New Year's Eve 15 times.

The French Caribbean island of Martinique fills its streets with song to ring in Christmas time.

The idea is friends and neighbours go from house to house, singing Christmas songs and sharing food and drink.

How is climate change hurting reindeer populations in the Arctic?

Where is Santa Claus right now? Find out here with the Xmas tracker