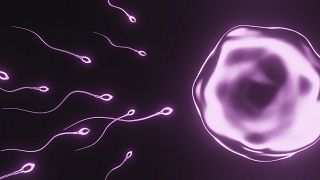 Researchers say global sperm counts have dropped by a “staggering” 50 per cent over the past five decades - and the decline is gaining pace.   -   Copyright  Canva
By Natalie Huet  •  Updated: 17/11/2022

Sperm counts worldwide have halved over the past five decades, and the pace of the decline has more than doubled since the turn of the century, new research shows.

The international team behind it says the data is alarming and points to a fertility crisis threatening the survival of humanity.

Their meta-analysis looked at 223 studies based on sperm samples from over 57,000 men across 53 countries.

It shows for the first time that men in Latin America, Asia, and Africa share a similar decline in total sperm counts and concentration as previously observed in Europe, North America, and Australia.

The authors warn that the mean sperm count has now dropped dangerously close to the threshold that makes conception more difficult, meaning couples around the world may encounter problems having a baby without medical assistance.

The findings, published on Tuesday in the journal Human Reproduction Update, serve as "a canary in a coal mine," said Professor Hagai Levine, the study’s lead author from the Hebrew University of Jerusalem’s Hadassah Braun School of Public Health.

"We have a serious problem on our hands that, if not mitigated, could threaten mankind’s survival," he said in a statement.

As part of a team also featuring Professor Shanna Swan at the Icahn School of Medicine in New York, along with researchers in Denmark, Brazil, Spain, Israel, and the USA, Levine studied sperm count trends in regions that had not been reviewed previously.

That same team had already reported in 2017 an alarming decline in sperm counts across the Western world.

In this latest study, they found that average sperm counts all around the world had fallen by over 50 per cent over the past five decades.

It looks like a pandemic. It's everywhere. And some of the causes may stay with us for a very long time

"It’s just unbelievable. I couldn’t believe it myself," Levine told Euronews Next.

The fact that these findings were confirmed across the rest of the world points to a global crisis that could be compared to climate change, according to Levine.

"As in climate change, the impact could be different in different places, but generally the phenomenon is global and should be treated as such," he added.

"It looks like a pandemic. It's everywhere. And some of the causes may stay with us for a very long time".

The researchers say that while sperm counts are “an imperfect proxy for fertility,” they are closely linked to fertility chances.

They explain that above a threshold of 40–50 million/ml, a higher sperm count does not necessarily imply a higher probability of conception.

On the other hand, below that threshold, the probability of conception drops off rapidly as sperm count declines.

"On a population level, the drop in mean sperm count from 104 to 49 million/ml that we report here implies a substantial increase in the proportion of men with delayed time to conception,” the study’s authors wrote.

"These issues are not just a problem for couples trying to have kids, they are also a huge problem for society in the next 50 odd years, as less and less young people will be around to work and support the increasing bulge of elderly folk," he said.

While their research did not explore the causes of this drop in sperm counts, the authors say it reflects "a global crisis related to our modern environment and lifestyle," and they point to the disrupting role of chemicals on our hormonal and reproductive systems.

They add that sperm counts are also an indicator of men's health, with low levels associated with an increased risk of chronic disease, testicular cancer, and a decreased lifespan.

Dr Sarah Martins da Silva, a senior lecturer in reproductive medicine at the University of Dundee, said she found it particularly concerning that the rate of decline of sperm counts had doubled since 2000, and called for more research on the causes behind this trend.

"The human race is not at immediate risk of extinction but we really need research to understand why sperm counts are falling," she said.

"Exposure to pollution, plastics, smoking, drugs, and prescribed medication, as well as lifestyle, such as obesity and poor diet, have all been suggested to be contributory factors although effects are poorly understood and ill-defined".

The tipping point for mankind?

The findings were published on the day the global population passed the 8 billion mark, putting more pressure on the planet’s limited natural resources.

"Philosophically, maybe the decline in sperm count and infertility is somehow the way of the world to balance what's going on," Levine told Euronews Next.

"But, you know, that's just a thought. It's not a scientific thought".

He said the findings should be of concern to everyone - regardless of their opinions on how many human beings the planet needs right now.

"Sperm count is a very good measure of global health and of our future. And regardless of the number of people you think we need on Earth, you don’t want it to be determined by hazardous events rather than our own choices," Levine said.

"I think we have to monitor it very carefully at the global level, at the population level, at the local country level, and also the personal level," he added, calling on authorities to improve lifestyles and limit human exposure to manmade chemicals through better regulation.

"Sometimes there is a tipping point and the system collapses at once. It means something is happening with our ecological systems, our reproductive systems - and at some point, it’s just too much".