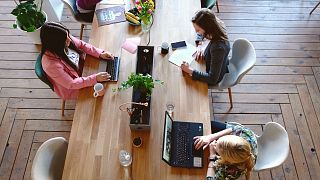 Coworking spaces are on the rise around the world, as after the pandemic many workers still enjoy working remotely but don’t want to lock themselves up inside their homes.

But one city is winning the race to provide thriving shared working spaces: London.

According to online company Business Name Generator (BIG), which examined factors like the number of available coworking spaces, their average monthly cost and Internet speed across 53 cities, London is the best city in the world for coworking, followed by Singapore, Berlin, Bangkok and Toronto.

This is maybe not surprising considering the sheer number of people who live in London - over 9 million - and those among them who freelance or are self-employed and might require such alternative working solutions.

Besides London and Berlin, three other European cities made it in the top 10: Barcelona ranked eighth, Madrid ninth and Copenhagen 10th.

For many, in London and elsewhere, going into the office every day has become a thing of the past, especially after the COVID-19 lockdowns.

And yet, despite the joys of working from home, many still miss the buzz of a shared workplace and the company of other people, or simply feel a little claustrophobic spending 24 hours a day looking at the same four walls.

But it’s not everywhere that you can find the perfect place to get out of your bubble while keeping your focus, where you can find comfy chairs, nice desks and good coffee and, most importantly, where thousands of other people are in search of exactly the same things.

Other European capital cities like Amsterdam and Paris respectively ranked 12th and 14th for coworking, with the French capital counting only 246 coworking spaces for a population of 2.1 million people.

Madrid, Copenhagen and Amsterdam have even fewer coworking spaces, with the Spanish capital counting 190 spaces, the Danish capital 47 and the Dutch capital 119.

But all that glitter in London isn’t gold: the city, which is famously plagued by high rents and crowded Tube trains, was found to be the sixth worst city in the world for commuters because of the high costs of its public transport, topped only by Istanbul, Rio de Janeiro, Berlin, Miami and Tel Aviv.

London has plenty of beautiful, stylish, innovative coworking spaces for all tastes and budgets - the issue might just be about getting there.