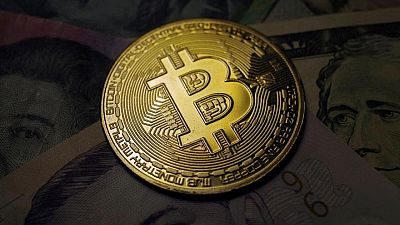 <div> <p>By Tom Wilson</p> <p><span class="caps">LONDON</span> – Bitcoin is struggling to go green, with the cryptocurrency making only slim gains in its usage of sustainable energy in the year to January, research by Cambridge university showed on Tuesday. </p> <p>Processing bitcoin transactions and “mining” new tokens is done by powerful computers, hooked up to a global network, that compete against others to solve complex mathematical puzzles.</p> <p>The process guzzles electricity, with its heavy reliance on polluting fossil fuels such as coal drawing criticism from policymakers, investors and environmentalists who worry over its impact on global warming. </p> <p>Projects have sought ways to shift bitcoin mining towards cleaner energy, such as repurposing heat byproducts from oil extraction for crypto mining.</p> <p>Yet fossil fuels made up some 62% of bitcoin’s energy mix in January 2022, the latest data available, versus 65% a year earlier, the research by the Cambridge Bitcoin Electricity Consumption Index (<span class="caps">CBECI</span>) showed. </p> <p>While the level of coal fell to 37% from 47%, bitcoin became more reliant on gas, which in January accounted for a quarter of its energy mix versus 16% a year earlier. </p> <p>The role of sustainable power – classed as nuclear, hydro, wind and solar – in the mix barely rose, hitting about 38% from 35% a year earlier. Hydro dropped to 15% from around 20%. </p> <p>Bitcoin mining is mostly unregulated and opaque, with few centralised bodies gathering data. The Cambridge study was based on data on the geographical spread of mining across the world and the energy mix of individual countries. </p> <p>The report said its findings “noticeably deviate” from estimates by the U.S.-based Bitcoin Mining Council industry body that in July put the share of sustainable energy in bitcoin’s power mix at about 60%. </p> <p>“We are trying to show what bitcoin’s footprint is,” said <span class="caps">CBECI</span> lead Alexander Neumueller. “The energy mix really has a strong impact on greenhouse gas emissions.” </p> <p>Bitcoin’s greenhouse gas emissions are set to hit 48.4 million tonnes of carbon dioxide equivalent this year, some 14% lower than the estimated emissions for 2021, <span class="caps">CBECI</span> said.</p> </div>