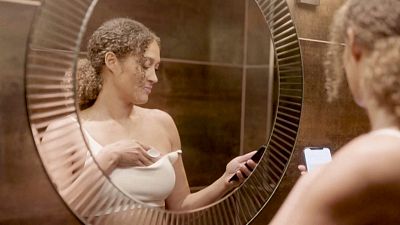 Image shows a woman using the Dotplot , a new device for women to perform at-home checks for breast cancer.   -   Copyright  James Dyson Award via Reuters
By Euronews  with Reuters  •  Updated: 12/09/2022

Faced with “confusing and conflicting” advice to women on self-checking for breast cancer, two young entrepreneurs have responded by developing a novel device to monitor abnormalities in breast tissue at home.

The Dotplot, a hand-held device connected to an app, is the result of their ingenuity - and it won this year’s prestigious James Dyson Award.

"You take your device and press it against your torso. It will take the reading of that area using sound waves. And it will flash on the next point (...) until you've covered all areas that need to be checked over,” said Debra Babalola, one of the co-developers and a recent graduate of Imperial College London.

“Once that's done, you receive a report of your breast health information for that month, which will then be compared to previous months as well, to highlight any changes that have been developing within your breast tissue," she added.

According to the World Health Organization, in 2021, breast cancer overtook lung cancer as the most common form of the disease and now accounts for almost 12 per cent of new cases each year.

Dotplot’s co-developer, Shefali Bohra, herself experienced a cancer scare when she discovered an unusual knot in one of her breasts following a gym session.

While ultimately the knot turned out to be non-serious, the experience left Bohra shocked by the paucity of self-check tools on the market to help women identify early-stage breast cancer.

Winning the James Dyson Award, an international competition that recognises the best in industrial design, will inject €5,600 into their project and help the two women on the road to securing clinical trials for their invention in the coming years

Beyond that, Bohra and Babalola have their sights on developing the Dotplot further so that it can detect a range of other conditions.

“The next focus is looking at testicular cancer for men and then soft tissue sarcoma,” Bohra said, adding that these are diseases for which lumps can typically be felt in the early stages.

“That's why we feel if we could solve it for something which is as complex as the breast tissue, it would potentially be easier to look at other regions within the body".