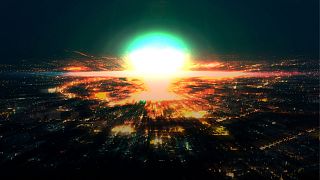 Amid the Russian invasion of Ukraine and rising geopolitical tensions, revived fears of nuclear war have prompted many to question what a nuclear conflict would mean for humanity and the planet.

Any nuclear conflict would have a huge range of devastating consequences, from initial deaths in the direct blasts to the lingering effects of radiation and environmental pollution.

But immediate casualties could be dwarfed by deaths from a subsequent global famine, caused by massive amounts of soot blocking the Sun and disrupting climate systems and food production, according to new research published in the journal Nature Food.

Climate scientists at Rutgers University have mapped out the effects of six possible nuclear war scenarios.

A full-scale nuclear war between the US and Russia, the worst scenario modelled, could result in more than five billion people dying of hunger after two years. Even a relatively small-scale conflict between India and Pakistan could lead to worldwide famine.

Soot from explosions would disrupt climate

In a nuclear war, bombs targeted at cities and industrial areas would start firestorms, injecting large amounts of soot into the upper atmosphere which would spread globally and rapidly cool the planet, say the researchers.

This would disrupt the Earth’s climate, impacting food production systems on land and in the oceans.

The researchers used a climate forecasting tool to estimate the productivity of major crops on a country-by-country basis.

The ozone layer would be destroyed by the heating of the stratosphere, producing more ultraviolet radiation at the surface, and we need to understand that impact on food supplies.

They analysed what would happen in six possible nuclear conflict scenarios, each of which would result in different amounts of soot in the atmosphere, and could see temperatures fall between one and 16 degrees Celsius.

Even a relatively small-scale battle between India and Pakistan could result in crop yields declining by around 7 per cent within five years of the conflict.

Both countries possess nuclear arsenals of comparable size, and of the world's nine nuclear-armed countries, the two are also among the handful that has been increasing their nuclear warhead stockpiles, according to the Federation of American Scientists (FAS).

Meanwhile, a full-scale nuclear war between the US and Russia, which are jointly estimated to account for 90 per cent of the world’s nuclear stockpile, could see production fall by around 90 per cent in the three to four years after the fighting.

The researchers considered mitigating factors like using crops fed to livestock as human food, or reducing household food waste, but concluded that these sorts of interventions would not stop large parts of the world from experiencing famine, especially after larger-scale conflicts.

Crop declines would be most severe in the mid to high-latitude nations, including major exporting countries such as Russia and the United States, which could trigger export restrictions and cause severe disruptions in import-dependent countries in Africa and the Middle East.

"Future work will bring even more granularity to the crop models," said Lili Xia, lead author of the study and an assistant research professor in the School of Environmental and Biological Sciences at Rutgers University.

"For instance, the ozone layer would be destroyed by the heating of the stratosphere, producing more ultraviolet radiation at the surface, and we need to understand that impact on food supplies," she said.

"If nuclear weapons exist, they can be used, and the world has come close to nuclear war several times," said Alan Robock, the study’s co-author and a professor of climate science in the Department of Environmental Sciences at Rutgers University.

"Banning nuclear weapons is the only long-term solution," he said. "The five-year-old UN Treaty on the Prohibition of Nuclear Weapons has been ratified by 66 nations, but none of the nine nuclear states".

"Our work makes clear that it is time for those nine states to listen to science and the rest of the world and sign this treaty".