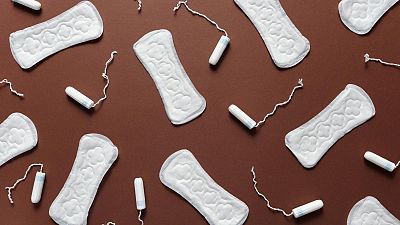 Scotland has become the world’s first country to protect the right to free period products in law, marking a key step towards tackling "period poverty".

The Period Products Act 2021 came into force on Monday, meaning that local authorities and education providers in Scotland now have a legal duty to provide free period products to anyone who needs them.

The Scottish Government said it had invested more than £27 million (€32 million) to fund access to period products in a range of public settings, and that the new law “will cement this progress”.

Labour Member of the Scottish Parliament (MSP) Monica Lennon, who campaigned for the legislation, said she was proud to have pioneered the new law.

"Local authorities and partner organisations have worked hard to make the legal right to access free period products a reality," she said.

"I’m grateful to them and the thousands of people who have got involved across the country".

"This is another big milestone for period dignity campaigners and grassroots movements which shows the difference that progressive and bold political choices can make," she added.

"As the cost-of-living crisis takes hold, the Period Products Act is a beacon of hope which shows what can be achieved when politicians come together for the good of the people we serve".

"This is more important than ever at a time when people are making difficult choices due to the cost of living crisis, and we never want anyone to be in a position where they cannot access period products," she said.

People can find their nearest collection point to get these period products through the PickupMyPeriod mobile app, which was launched earlier this year by social enterprise Hey Girls with Scottish Government support.

"The Period Product Act shows Scotland is leading the way in recognising that period products are not a luxury and should be freely available to all," said Celia Hodson, the founder of social enterprise Hey Girls.

The period product legislation was unanimously backed in the Scottish Parliament in 2020, with first minister Nicola Sturgeon saying at the time that it was “an important policy for women and girls”.

In 2018, Scotland became the first country to provide free sanitary products in schools, colleges, and universities.

Around one in 10 girls in the United Kingdom are unable to afford period products, according to a survey by Plan International UK in 2017.

How to exercise in a heatwave safely, according to the experts