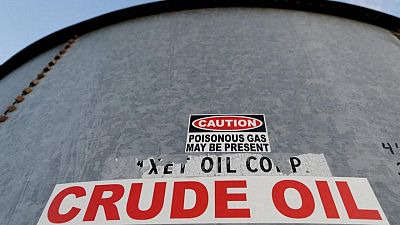 U.S. crude oil stocks rose by 5.5 million barrels in the most recent week, the U.S. Energy Information Administration said, more than the expected increase of 73,000 barrels.

However, U.S. gasoline stocks fell sharply as implied demand rose after weeks of lackluster activity during what is supposed to be peak summer driving season.

“Everyone has been very much focused on potential demand destruction, so seeing implied demand showing an outsized rebound for last week has probably given some comfort to those really concerned about that,” said Matt Smith, lead oil analyst for the Americas at Kpler.

Gasoline product supplied rose in the most recent week to 9.1 million barrels per day, though that figure still shows demand down 6% over the past four weeks compared with the year-ago period.

U.S. oil refiners and pipeline operators expect strong energy consumption for the second half of 2022, a Reuters review of company earnings calls showed.

U.S. consumer prices were unchanged in July due to a sharp drop in the cost of gasoline, delivering the first notable sign of relief for Americans who have watched inflation climb over the past two years.

That contributed to a rise in risk assets including equities, while the U.S. dollar fell more than 1% against a basket of currencies. With most worldwide oil sales transacted in dollars, a weakening greenback is supportive for oil. However, crude’s gains were modest.

“There is not a lot of bullish strength in the market. With this kind of dollar weakness, you should be seeing a $2-$3 increase in crude and you’re not seeing that,” said Eli Tesfaye, senior market strategist at RJO Futures in Chicago.

The market earlier slipped as flows on the Russia-to-Europe Druzhba pipeline resumed.