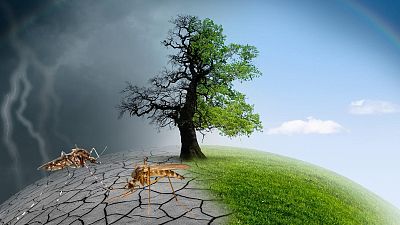 More than 58 per cent of human diseases have gotten worse because of climate change, according to a new study.

The groundbreaking research, published in Nature Climate Change on Monday, was conducted by researchers at Mamoa’s University of Hawaii, who carried out a systematic search for real-life examples of the impact of ten climatic hazards worsened by greenhouse gas emissions on human diseases.

Analysing over 70,000 scientific papers for examples of direct links between known diseases and climate change, the scientists discovered that all of the extreme climatic events made more common and more severe by global warming had an influence on diseases triggered by viruses, bacteria, animals, fungi and plants.

Of 375 diseases analysed, 218 proved to be affected by climate change.

Specifically, researchers found that climate change-related hazards bring pathogens closer to people, with warmer temperatures and more humid environments, associated with the increase in precipitation, favouring the proliferation of mosquitoes, ticks, fleas, birds, and mammals which are responsible for the spread of several viruses and bacteria like dengue, the plague, Lyme disease, and malaria.

With climate change influencing more than 1,000 transmission pathways... and climate hazards increasingly globally, we concluded that expecting societies to successfully adapt to all of them isn’t a realistic option.

Mosquito populations, in particular, have found a breeding ground in the aftermath of floods and storms, causing, in turn, an uptick in the pathogens they transmit, including West Nile fever and yellow fever.

But climate change is also bringing people closer to pathogens.

As extreme weather events cause the displacement and forced migration of thousands of people in some of the most vulnerable parts of the world, contact between humans and pathogens increases.

Researchers have linked heatwaves with the increased spread of waterborne diseases such as Vibrio (infections caused by bacteria) and gastroenteritis, while storms, floods, and sea level rise were linked to the spread of cholera, pneumonia, typhoid, hepatitis, and respiratory disease and skin diseases, among others.

The pathogens themselves are growing stronger in order to adapt to the changing weather, while our bodies’ immune response has grown weaker due to the added stress of hazardous conditions, unsafe living situations and the uncertain access to healthcare people experience after an extreme weather event.

"Given the extensive and pervasive consequences of the COVID 19 pandemic, it was truly scary to discover the massive health vulnerability resulting as a consequence of greenhouse gas emissions," Camilo Mora, a geography professor in the College of Social Sciences (CSS) and lead author of the study, said in a statement.

"There are just too many diseases, and pathways of transmission, for us to think that we can truly adapt to climate change. It highlights the urgent need to reduce greenhouse gas emissions globally".

But there’s also some positive news that came to light in the report.

Humans running out of time to adapt

While the vast majority of diseases have gotten worse because of climate change-related extreme events, some actually got better. Those viruses and pathogens which cannot survive in warmer temperatures actually diminished.

But this hardly balances out how much worse diseases have gotten because of the way greenhouse gas emissions are affecting our planet’s climate. It’s unlikely humans will be able to adapt in time to face these stronger, more widespread diseases, the report authors suggest.

“With climate change influencing more than 1,000 transmission pathways like those and climate hazards increasingly globally, we concluded that expecting societies to successfully adapt to all of them isn’t a realistic option,” the study’s authors wrote in an article published in The Conversation.

"The world will need to reduce the greenhouse gas emissions that are driving climate change to reduce these risks".