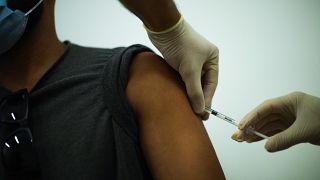 Fears of stigmatising men who have sex with men are preventing monkeypox messaging from focusing on those who are most at risk from the virus.   -   Copyright  Francisco Seco/AP
By Giulia Carbonaro  •  Updated: 01/08/2022

Since the start of the monkeypox (MPX) outbreak, over 11,000 cases have been reported across the European Union. In the UK, the number of confirmed cases has now surpassed 2,300 as of July 28.

Combined with the growing number of cases in Africa (over 2,000 estimated since the beginning of the year) and North America (over 5,000 in the US and over 800 in Canada), the alarming infection rate led the World Health Organization (WHO) on July 23 to declare the virus a global emergency.

In the overwhelming majority of monkeypox cases, those affected are men who have sex with men.

As the WHO highlighted when declaring the virus a global emergency last month, the outbreak “is concentrated among men who have sex with men, especially those with multiple sexual partners”.

This information shared by the global health body was widely criticised by people fearing it could encourage the stigmatisation of the LGBTQIA+ community and potentially incite homophobia in response to the virus spreading in a grim repeat of what happened during the AIDS epidemic of the 1980s.

This is why in the media, the discourse around monkeypox often veers away from focusing on gay and bisexual men, wary of labelling the virus as a gay-related disease.

But while the intention might be noble and the risk of stigmatising gay and bi men real, many within the queer community have raised criticism over the fact that failing to target public health messaging at the LGBTQIA+ community will prevent those most vulnerable to monkeypox from protecting themselves from the virus.

“In some of the early days of HIV, there was a narrative that said that if we publicly talk about where HIV has been disproportionately impacting, that is going to fuel homophobia, it's going to fuel racism”, Dr Will Nutland, HIV researcher and founder of sexual health organisations Prepster and The Love Tank, told Euronews Next.

“But that homophobia and racism was already rife, and pretending that HIV wasn't disproportionately impacting on people of colour and men who had sex with men just meant that our attention got taken away from it and meant that resources got diluted and resources got pushed all over the place”.

Nutland is concerned that the same is happening now with monkeypox.

“Right now, the vast majority of people who are being diagnosed with monkeypox are men who have sex with men, because it's being transmitted through dense sexual and social networks,” Nutland said, adding that most diagnoses occur within the gay community also because queer men are used to attending sexual health clinics on a regular basis.

“We have a lot less stigma about talking about sexual health and go into a clinic if we notice a bump or a lesion or a new rash, which tells a good story about our resilience and our collective capacity to look after our health,” Nutland added.

“But pretending that monkeypox is being equally diagnosed in other groups of people does none of us any favours. It means that those people who are least likely to be diagnosed with monkeypox will have suspicions raised that a heat rash, for example, that they've had whilst going through a hot spell is monkeypox,” Nutland said.

The consequences of targeting the wrong people and alarming the general population over monkeypox instead of raising alert between those most affected could have a profound impact on the spread of the virus in the future.

“Those people who do have undiagnosed monkeypox, who need testing and treatment, and those people who are most likely to be involved in monkeypox acquisition and need vaccination will not be able to access those services because of a concept that monkeypox is equally impacting on all of us,” said Nutland.

“And the data right now is showing that that is not the case. It is absolutely showing that the vast majority of people right now who are being diagnosed and are getting sick with monkeypox are gay and bisexual men”.

The UK - where Nutland is based - has launched mass vaccination events inviting all men who have sex with other men to get the smallpox vaccine the country is offering to protect against monkeypox.

In London last weekend, hundreds of men could be seen lining up at hospitals and venues where the vaccine was being offered. But as many on Twitter pointed out, including Nutland, most of those in the lines were white men.

“When you have super-vax events where, in essence, anyone who is a gay or bisexual man can turn up irrespective of monkeypox risk, that’s going to lead to a set of inevitable consequences of inequality,” Nutland said.

“And if you are a gay or bisexual man from a more marginalised community, that might mean that you're not prepared or not able to stand in line where film crews or photographers or members of the public might see you.

The financial circumstances of those exposed to the virus also play a role in their capacity of reaching vaccination centres, especially at a time when so many people are struggling with a cost of living crisis and rising inflation.

“The inevitable consequence of this is that those people who are already most marginalised in queer sexual health - and by that I include queer migrants, queer men of colour and queer men who have less disposable income, as well as other people who are least likely to be accessing vaccines through these kinds of schemes - are going to be most exposed to monkeypox in the coming months,” Nutland said.

The solution, he argued, would be to implement more vaccination processes parallel to the current ones.

“In addition to having super-vax events that get lots of vaccines into as many people's bodies as possible, we need a parallel process that thinks about how we target those groups of men,” Nutland said.

“And there is work happening at the moment to start to do that. But that work needs to be ramped up and that work needs to be targeting fewer men but in the geographical spaces or the social spaces where those men are more likely to meet, and using culturally-appropriate language and languages other than English and vaccinators and health teams who are able to answer the questions of those guys in languages other than English”.

Ramping up vaccination efforts to counteract the spread of monkeypox will mean dedicating more resources to the prevention of the virus which would be costly.

“Right now we are - as well as being in a period of vaccine scarcity - also in a period where our health services and our health systems are trying to do things as cheaply as possible,” said Nutland.

Taking the matter into their own hands

Increasingly, gay men who have contracted monkeypox are sharing their experiences on Twitter.

That queer men are starting to share their experiences with the virus is incredibly important, Nutland contends, especially as they often face backlash on social media, with hateful and homophobic comments aimed at them.

“It's the most affirming, brilliant act of resilience and resistance that I've seen in a long time,” said Nutland.

“Those men are educating each other, educating their peers. They're informing the public health response. I can honestly applaud those guys for the absolute brilliant steps they're taking”.

“It’s inviting people to kick back as allies,” he added.