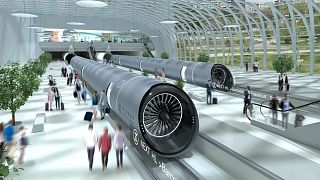 From endless queues to cancelled flights and lost luggage – if you've experienced any of the chaos plaguing European airports this summer, it might help to imagine a future in which international travel is smoother and doesn't revolve so much around flying.

Picture this: the year is 2045. You’re standing on a platform in Berlin awaiting a sleek Hyperloop pod that will glide into the station to a noiseless halt and then deposit you in Paris an hour later, ready for your morning meeting.

In the afternoon, you’ll take another southbound pod on a leisurely trip to Barcelona for the weekend, a journey that will take no more than 90 minutes.

The speed and ease is no longer a surprise to you, because in the last quarter-century, almost all travel throughout Europe has shifted from the skies to the ground.

Short-haul flights are nothing but a relic of a carbon-fuelled past.

It might seem like the stuff of science fiction, but there are real reasons to believe that a future of mobility like this could be possible.

The climate crisis is focusing the minds of European policymakers on their stated goal of carbon neutrality by 2050. Many are betting on rail to get us there.

Why isn't rail the go-to choice for European travel?

"If we want to achieve decarbonisation and the climate change targets, rail is the instrument to achieve it," Carlo Borghini, the head of Shift2Rail, the EU body responsible for driving research and innovation in the rail sector, told Euronews Next.

Trains already boast impressive green credentials when you factor in their high degree of electrification relative to other transport modes. As it stands, they’re responsible for a mere 0.5 per cent of carbon emissions within the EU.

Still, if Europe wants to cut transport-related emissions – which account for around a quarter of total EU greenhouse gas emissions – there is a long way to go in encouraging passengers and freight off aircraft and into train stations.

Despite the continent’s deep experience in the sector and advanced rail networks, only about 7 per cent of passengers and 11 per cent of goods travel by rail.

This can be attributed to the fact that rail in Europe is little more than a patchwork of different national systems that has seen little in the way of a comprehensive Europe-wide strategy, according to a report by environmental think tank Germanwatch.

The result is that cross-border train travel can be an expensive, unreliable, and inconvenient alternative to flying for many.

For example, there are currently no direct train services linking Berlin and either Brussels or Paris, though a TGV Paris-Berlin is due to launch at the end of 2023, with the journey expected to last seven hours.

The good news, however, is that in the wake of COVID-19, priorities are shifting and there is a real appetite and political momentum to change this state of affairs.

The European Commission plans to double high-speed rail traffic by 2030 and triple it by 2050, and last December it unveiled an action plan including faster trains, simpler ticketing systems and support for cross-border trips.

Shift2Rail aims to establish a Single European Railway Area (SERA). It’s an idea designed to enable seamless cross-border mobility on the continent and simplify the network for rail operators.

We need to ensure that we have in Europe one single European network, meaning that our objective at the end is to transport goods from one side of the continent to the other.

"We need to ensure that we have in Europe one single European network, meaning that our objective at the end is to transport goods from one side of the continent to the other," said Borghini, Shift2Rail's executive director.

"At the same time, we need to ensure the same for the passenger, in order to ensure that any train operator, any railway undertaking can operate trains in each part of Europe without the need to make changes to the locos, to the wagons, to the power, and to the signalling system".

Beyond SERA, Shift2rail is drawing on around €1 billion in funding to help drive innovation towards three specific goals: lowering the life-cycle cost of the rail system, doubling the existing capacity, and reducing delays in the network.

But in the next stage, Borghini tells Euronews, it will be up to member states to decide on the tech solutions they want to fund.

"The next step is to bring rail research innovation to the market: investing in technological solutions that need to be both deployed, migrated... transforming the concrete system," said Borghini.

If there’s one thing that could lure passengers to trains, it’s likely the tantalising possibility of drastically reduced travel times between major European cities at zero emissions.

Companies like Nevomo in Poland and Zeleros in Spain are working towards making this a reality by developing respectively a hi-tech maglev rail system and a scalable Hyperloop system.

"Hyperloop is a new way of transport that basically reduces friction, which is the main source of inefficiency in transportation," said Juan Vicén Balaguer, the co-founder and Chief Marketing Officer of Zeleros Hyperloop.

"The two main frictions are the aerodynamics: when the vehicle moves there is some resistance of the air. And the other one is the ground friction that happens when a wheel touches the ground," he explained.

"In order to avoid that. We put the vehicle in a tube where we eliminate most of the air and on the other side we make the vehicle levitate so it doesn't touch any ground. We reduce the main friction and we can work with five to 10 times more energy efficiency than an airplane".

The Hyperloop concept has its roots in the early 19th century, when mechanical engineer George Medhurst first proposed a method of conveying people and goods using pneumatic tubes.

But it was Elon Musk who breathed new life into the idea when he released an open-source concept for a Hyperloop mass transit system in 2013.

In fact, Zeleros began as a university project competing in a Hyperloop Design competition hosted by Musk’s SpaceX in 2015, where they walked away with two awards for best design and best propulsion system.

Encouraged by their success, the team decided to go into business. They now boast a staff of over 150 people and are at the stage of testing the prototype they have developed.

The aim is to achieve speeds of 1,000 km at zero emissions.

In the case of Nevomo, while their stated aim is to eventually develop their own Hyperloop prototype, in the short term they are focusing their attention on developing a "magrail" system that they say could be operational by 2025.

"We are orienting at something else in between because Hyperloop is still going to take some time to get implemented," Nevomo’s Business Development Director Milan Chromík told Euronews Next.

"We expect it in a couple of decades. But in the meantime, we understand very much that even the current infrastructure needs to be modernised".

Nevomo’s system is based on magnetic levitation technology which uses magnets to elevate a train off the track and another set of magnets to propel it along the track.

Crucially though, the company is combining this technology with traditional rail by adding the magnetic components and guidance rails to the existing infrastructure, a feature it believes gives Nevomo a distinct advantage over its competitors.

The company recently signed an agreement with the Italian Railway Infrastructure manager Rete Ferroviaria Italiana to verify the technical and economic feasibility of superposing magrail technology over existing tracks.

Together they will apply for European funding to carry out a full-scale trial of the technology at the test circuit at Bologna San Donato.

The European Union is quite pushing now to eliminate short-haul flights within Europe, and they would love to put it on the rails, but on the rails, there is no place to do so. So there needs to be a change in the railway industry to be able to meet those needs.

According to Chromik, the Nevomo magrail tech, if applied to high speed lines, would be capable of doubling the top speeds of a TGV train to 550 km/h.

Another benefit of the tech is that it is able to send individual "pods" to a final destination instead of long trains, something Chromík suggests will increase the capacity of existing lines.

"Nowadays, the current systems, they have come to their limits, and on the most populated, dense lines you are not able to increase traffic anymore," he said.

"The European Union is quite pushing now to eliminate short-haul flights within Europe, and they would love to put it on the rails, but on the rails, there is no place to do so.

"So there needs to be a change in the railway industry to be able to meet those needs".

Editor's note: This article was first published in August 2021 and has since been updated.