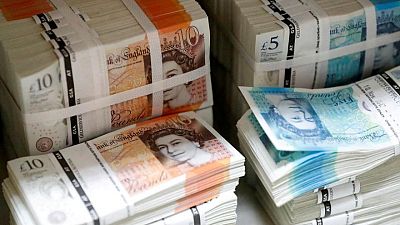 LONDON -Britain’s pound fell to its lowest level in over a week against the euro after data showed a sharp slowdown in business activity, adding to concerns that the UK could slip into recession later this year.

S&P Global’s flash Composite Purchasing Managers’ Index (PMI), a monthly gauge of the services and manufacturing industries, fell to 51.8 in May from 57.6 in April, its lowest level since February last year.

The preliminary reading was worse than all forecasts in a Reuters poll of economists, which had pointed to a drop to 57.0.

“This sudden deterioration in growth prospects will come as a massive worry to the Bank of England and will certainly throw further rate hikes into question,” said Infinox financial market analyst Richard Perry.

“This further firms our expectation that another one, or at most, two 25bps hikes will be possible before the BoE is required to reassess its tightening outlook.”

Money markets are currently fully pricing in a 25 basis point rate rise from the BoE at its June policy meeting and 114 basis points of tightening by the end of the year, down from around 125 basis points on Friday after strong retail sales data.

At 1420 GMT, the pound was down 1.0% against the euro to 85.80 pence, after earlier touching its weakest level against the single currency since May 12.

The pound was already falling against the euro after European Central Bank chief Christine Lagarde said on Tuesday she saw the ECB‘s deposit rate at zero or “slightly above” by the end of September, implying an increase of at least 50 basis points from its current level.

“The bounce in EUR/GBP owes to the broad move higher in the euro on the back of comments in the past two days from the ECB’s Lagarde on the near-term prospect of rate hikes,” said Danske Bank chief analyst, FX and rates strategy, Jens Naervig Pedersen before the data.

“We could see EUR/GBP rise to around 0.86 short term, as relative monetary policy will continue to favour the euro,” Pedersen added.

Meanwhile, British public borrowing in the 2021/22 financial year fell to 144.6 billion pounds ($180.88 billion) or 6.1% of GDP, figures from Britain’s Office for National Statistics showed on Tuesday, down by more than 7 billion pounds from an initial ONS estimate last month.