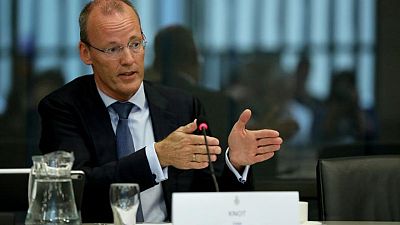 Meanwhile, investors turned to risky assets away from safe-haven bonds on optimism about an easing in China’s crackdowns on its technology sector and the spread of COVID-19.

The introduction of the 6/24 Schatz short-dated German government bond has produced abysmal results, with the second-lowest cover of any Schatz auction, the record being a new issue in May 2018.

The ECB should raise its key interest rate by 25 basis points in July but should not yet rule out a bigger increase, Knot told Dutch TV programme College Tour.

Money markets are currently pricing in around 105 bps of ECB rate hikes by year-end, from 95 bps late on Monday.

“Once the ECB starts committing to hiking rates, those expectations should come down, so we shouldn’t over-interpret this comment (from Knot),” DZ Bank rates strategist Sophia Oertmann said.

“We think a 25 bps rate hike is the most likely scenario for July,” she added.

Concerns about the economy continued to weigh after weak data from China and the United States.

“Villeroy opened a new front in the expectations war yesterday by expressing concerns about the inflation impact of a lower euro,” ING analysts said.

Finance Minister Christian Lindner said Germany could not support a softening of EU fiscal rules, which “should be more realistic and effective”.

The war in Ukraine overshadowed concerns about the sustainability of Southern European countries’ public debts, with investors expecting the European Commission not to apply the bloc’s debt reduction rules next year due to the conflict.

However, less stringent regulation would enable most indebted countries to fulfil EU obligations without hurting the economic recovery.

“We have no concern about Italian debt sustainability in the near term. But the ECB‘s reluctance to disclose details of its purported financial fragmentation facility risks unnerving investors,” ING analysts said, while forecasting the spread between Italian and German yields to widen to 250 bps.

ECB officials said recently the central bank didn’t discuss any concrete instruments to avoid fragmentation – yield spread widening between core and periphery, which could hamper the transmission mechanism of monetary policy – but they were ready to act.