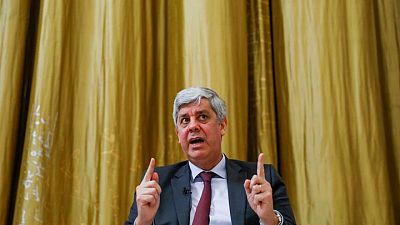 LISBON -European Central Bank (ECB) Governing Council member Mario Centeno said on Friday that the ECB should begin an interest rate hike cycle in early July, and he called for any withdrawal of stimulus to be done gradually.

He said the normalisation of monetary policy was “necessary and desirable”, adding that any perception there had not been “a sufficiently vigorous response” might require further, more aggressive tightening to control inflation at a later date.

Normalisation must be done gradually, he added, and policymakers should not “over-react” to inflation rising across Europe or risk penalising economic growth.

He said the ECB is likely to end its bond-buying stimulus programme early in the third quarter of this year and then start a cycle of interest rate hikes.

“It is anticipated that this could happen in the first weeks of the third quarter,” he said at a banking conference in Lisbon.

With inflation soaring to a record high of 7.5% in the euro zone last month, well above the ECB‘s 2% target, policymakers are increasingly advocating a rapid unwinding of stimulus, and several have called for a rate hike in July.

“Although inflation remains high in 2022, there are no structural reasons why it should not converge towards the medium-term objective as imbalances are gradually resolved and uncertainty dissipated,” Centeno said.

“There are currently no structuring signs of de-anchoring inflation,” he said, acknowledging that “the balance of risks around inflation is skewed upward” after Russia’s invasion of Ukraine.

The possible second-order effects of wage pressures was “an additional risk which needs close and continued monitoring”, he added.