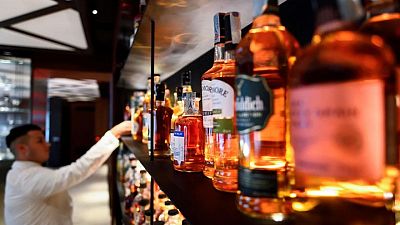 By Francesca Landini and Silvia Aloisi

MILAN – Campari plans to open several flagship bars for its best-selling spirits in Europe and beyond to help tap into a taste for the Italian aperitif culture, its chief executive said.

The drinks group last week reported higher sales in the first three months of the year thanks to soaring demand for its Aperol and Campari bitters as bars and restaurants reopened in Europe.

Even if the group’s drinks sold well for home consumption during the pandemic, serving a well-crafted cocktail remains one of the best ways to win new customers, Campari CEO Bob Kunze-Concewitz said.

“When it comes to aperitifs, the magic is made in bars, mixing,” he said in a meeting with a small group of journalists.

“In the next five years we would like to have Camparino (bars) in London, New York, Singapore,” he said, unveiling plans to export the model of Milan’s historic outlet for its red bitter, the key ingredient of the Negroni cocktail.

He did not put a price on the planned investment.

Campari is facing more competition on its home turf after a new Spritz cocktail was launched in Italy on Thursday by LVMH‘s Moet Hennessy.

The Chandon Garden Spritz, a premium ready-to-drink version of the aperitif which bets on the appeal of its natural ingredients and lower sugar content, was unveiled in France and northern European countries last year and is now landing in Italy, Spain, Britain and Asia.

Premium sparkling wines costing more than 12 euros a bottle, of which Chandon is the market leader, represent a segment worth 4.4 billion euros in sales, she said.

“We want to win the hearts of Italians, both in bars and at home, in a country that loves Spritz,” she told Reuters in Milan, presenting a cocktail made from sparkling wine from Argentina, an orange-bitter liqueur, orange peel, herbs and spices. At 8-10 euros per glass it is pricier than average cocktails in Italy.

Despite competing on aperitifs, Campari and Moet clinched an alliance to develop an e-commerce platform for wine and spirits last year around Italy’s online wines and spirits company Tannico, which will sell both versions of the Spritz.

Carlo Alberto Carnevale Maffè, Professor at Milan’s SDA Bocconi management school, said Campari’s plans for new bars was “consistent with the need of many brands to get closer to end-consumers by offering not only products but distinctive experience contexts that reinforce brand identity.”

He pointed that these initiatives could also allow groups to collect precise data on consumption patterns and better understand their customers.

The Italian group bought back the Camparino bar in Milan’s central square for 5.6 million euros in 2018 and spent a further 6.5 million euros to eliminate the debt accumulated by the outlet and upgrade it.

In 2020 Campari paid 4.2 million euros to secure a space in Venice where the following year it opened Terrazza (Terrace) Aperol in the city where the aperitif became famous as the base for the traditional Spritz cocktail.

“Last year we opened the first Terrazza Aperol in Venice… and that will become a franchisee. The idea is to have 50-100 (terraces) in the world,” Kunze-Concewitz said, without giving a precise time-frame.