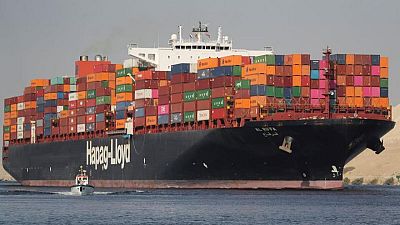 FRANKFURT – German container shipper Hapag-Lloyd on Thursday posted a net profit of 4.2 billion euros ($4.41 billion) in the first quarter of 2022, more than treble the number a year ago and, forecast another strong performance for the second quarter.

“The year has got off to an exceptionally strong start on the whole, and whilst there have been first signs that the market has passed its peak, we also expect a strong second quarter,” said Chief Executive Rolf Habben Jansen.

The CEO added that global supply chains continue to be under a significant pressure, citing the recent measures taken in China in response to COVID-19 outbreaks, and that the situation is expected to improve in the second half of the year.

Many ports are still congested, and hinterland infrastructures are strained, which together is resulting in longer turnaround times for ships and containers.

The company, the world’s fifth-biggest container liner, upheld preliminary forecasts made on April 28 for 2022 EBITDA to range between 13.6 and 15.5 billion euros, and for EBIT to come in at between 11.7 billion and 13.6 billion euros.

Revenues in January-March rose to 8 billion euros, largely thanks to average freight rates being achieved at $2,744 per twenty-foot equivalent standard container unit (TEU), versus $1,509 a year earlier, and also helped by a stronger dollar.

Transport volumes in the three months were roughly on a par with the prior-year level of three million TEU.