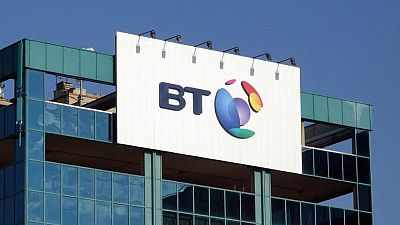 Britain’s biggest broadband and mobile provider agreed the terms in time for its full-year results, which met expectations with cost savings delivering a 2% rise in core earnings despite revenue slipping due to challenges in the enterprise market.

The company reassured shareholders by confirming it was on track to return to top-line growth this year and produce core earnings of at least 7.9 billion pounds ($9.6 billion).

Shares in BT rose more than 2% in early trading on Thursday but gave up some of the gains to trade 1% higher at 178 pence by mid morning, around the same price they were trading at three decades ago.

Jansen said the Discovery joint-venture would create a compelling sports offer for its customers, reduce exposure to expensive rights costs and provide a medium-term exit route.

BT had improved its offer in mobile and broadband by simplifying products, bundling services and cutting repair times, he said, resulting in churn remaining at or near historical lows despite price rises implemented last month.

The consumer division, which will increasingly focus on the EE mobile brand, returned to growth in the fourth quarter.

Jansen said it was difficult to forecast with certainty what impact the cost-of-living squeeze in Britain would have on the market. “But at the moment, what we’re offering our customers is hitting the mark,” he said, citing the low churn rate.

BT reported a 2% rise in core earnings to 7.6 billion pounds for the year to end-March, in line with market expectations, on revenue 2% lower at 20.9 billion pounds.