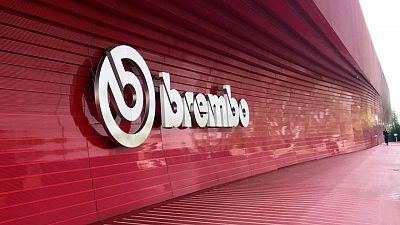 – Brake maker Brembo has a full order book and all of its plants are running at full capacity, apart from those in China due to a COVID-19 lockdown, its executive chairman said.

Matteo Tiraboschi said on Wednesday that Brembo had visibility of 3-4 months for its order book, as the Italian brake maker posted a 11.2% rise in first-quarter core earnings.

Tiraboschi said Brembo, which runs four production sites in China along with a commercial base and an R&D centre, suffered a fall of around 40% in output volumes in the country in April.

While volumes are now recovering, a ramp-up period of a few weeks was needed to reestablish supply channels, he added.

“We’ll have another volume drop in May, but we are confident we will recover lost production after the lockdown ends”.

Core profit margin for the Italian group, which makes brakes for several Formula One and MotoGP teams as well as premium carmakers such as Ferrari, was down compared to the first quarter last year, but still strong at 17.6%.

Milan-listed shares in Brembo closed up 9.3%.

Brembo did not provide forecasts for this year due to the geopolitical landscape and the complex situation affecting supplies. However, it said it would continue to outperform its reference market in terms of revenues.

Russia’s invasion of Ukraine was having limited direct impact, Brembo said, as it had no production plants in the areas affected and limited aftermarket customer exposure there.

The Ukraine crisis is, however, causing an increase in prices of commodities and energy, which Brembo said it was mitigating through hedging strategies and actions aimed at cost recovery from customers, along with a prudential increase in the levels of raw material inventories.

Tiraboschi said Brembo raised its stocks of raw materials, including aluminium, scrap metal, magnesium, tungsten and silicon, by an average of four days in the first quarter, from 53 days in the same period last year.