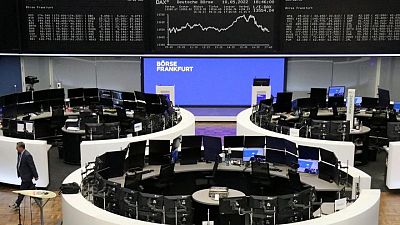 -European stocks locked in gains for a second straight session on Wednesday as strong earnings and a surge in economically sensitive sectors boosted sentiment after U.S. inflation growth slowed sharply in April.

A handful of upbeat earnings reports and merger activity kept investor sentiment firm for the day.

German conglomerate Thyssenkrupp surged 11.2% after it raised its outlook for sales and operating profit for 2022, while British catering company Compass Group climbed 7.4% on lifting its annual revenue forecast.

The recovery in mood followed a sharp selloff in global equity markets this month on worries over aggressive monetary tightening and lockdowns in China fuelling economic slowdown, pushing the STOXX 600 to a two-month low on Monday.

The index is down 5% so far this month.

“There are worries about high inflation and whether that leads to a recessionary environment. And you combine that with what’s going on in China in terms of the lockdowns, it’s bit of a mixed bag,” said Chi Chan, a portfolio manager at Federated Hermes.

The European Central Bank is likely to end its bond-buying stimulus programme early in the third quarter of this year, followed by a rate hike that could come just “a few weeks” later, ECB President Christine Lagarde said on Wednesday.

Data showed U.S. consumer price growth slowed sharply in April as gasoline prices eased off record highs, suggesting that inflation has probably peaked. But it is likely to stay hot for a while, keeping the Federal Reserve on track to raise interest rates.

“When the dust settled, traders focused on the fact that both the headline and the core reports slipped on the month so that removed much of the fear about the prospect of large rate hikes being introduced,” said David Madden, market analyst at Equiti Capital.

Bayer dropped 6.2% after the Biden administration asked the U.S. Supreme Court not to hear the German agriculture and pharmaceutical company’s bid to dismiss claims by customers who contend that its Roundup weedkiller causes cancer.