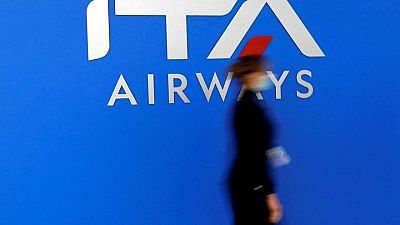 ROME – Italy’s government aims to sell state-owned ITA Airways, the successor to Alitalia, by the end of June after setting a deadline for binding offers of May 23, Economy Minister Daniele Franco said on Tuesday.

Three prospective bidders for ITA Airways have had access to its finance data room, Franco said addressing parliament over the issue.

They are shipping group MSC alongside Germany’s Lufthansa, the U.S. Certares fund in cooperation with Delta and Air France, and investor Indigo Partners, Franco added.

Under a government decree, Rome plans to privatise ITA through a direct sale while retaining a minority, non-controlling stake in a first stage.

MSC in January requested an exclusivity period of 90 days to iron out details of an acquisition, but Rome opted for a market-based procedure aimed at keeping the door open to other potential suitors.

“The outcome of the negotiations is not a foregone conclusion. We will examine the three offers in a transparent way, there is no decision on our part at present,” Franco said adding a key factor is that the buyer is at least 51% owned by a European player.

Lufthansa is interested in taking a minority stake in ITA, leaving the majority to MSC, the airline said in remarks during its shareholders meeting on Tuesday.

It added, however, that the review of ITA‘s financial data would be important to confirm this preliminary intention.

If the deal does go through, Lufthansa aims to build a close commercial cooperation with ITA and expects synergies to make the investment profitable in the long term, the carrier said.

Under an agreement with the European Union, Rome can inject up to 1.35 billion euros ($1.42 billion) into the ITA by 2023. A privatisation deal would potentially reduce the financial support granted by the state, limiting the costs for Italian taxpayers.

“The 400 million euro contribution is due and will be disbursed when necessary. ITA does not currently have a cashflow problem,” Franco said.