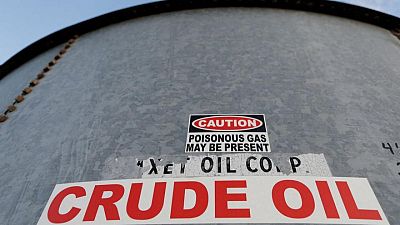 HOUSTON – U.S. crude oil price settled below $100 a barrel on Tuesday to its lowest level in two weeks as the demand outlook was pressured by coronavirus lockdowns in China and growing recession risks, while a strong dollar made crude more expensive for buyers using other currencies.

Early in the session, comments from the Saudi and UAE energy ministers boosted Brent and WTI up by more than $1 a barrel.

“These are volatile times, the daily price bars are outsized these days,” said John Kilduff, a partner at Again Capital LLC.

“As the EU continues to dither over whether or not they are going to embargo that Russian oil, that changes the calculus very much as well in both directions,” he added.

The European Union Commission has delayed acting on the proposal. Unanimity is required to ban oil imports from Russia, and while a French minister said EU members could reach a deal this week, Hungary has dug in its heels opposing an embargo.

Also, some European economies could suffer distress if Russian oil imports were curtailed further. If Russia retaliated by cutting off gas supplies, economies in emerging Europe, Central Asia and North Africa might slide back to pre-pandemic levels, the European Bank for Reconstruction and Development (EBRD) warned.

In addition to the recent G7 gradual import ban on Russian oil, Japan, which obtained 4% of its oil imports from Russia last year, has agreed to phase out those purchases. The timing and method have yet to be decided.

“The combination of COVID-related lockdowns in China and worldwide interest rate increases to battle inflation put equity investors on the back foot, strengthened the dollar and significantly raised concerns of economic slowdown,” said Tamas Varga of broker PVM Oil Associates.

With a steep fall in demand in China due to the lockdowns and discounted Russian barrels in the market, China gets to be more selective in the crude oil it buys, said Robert Yawger, executive director of energy futures at Mizuho.

The dollar held near a two-decade high ahead of a reading on inflation that could hint at the outlook for Fed policy.

On the supply side, the U.S. Energy Information Administration trimmed its U.S. crude oil production forecasts for 2022 and 2023. It now expects output in 2022 to average 11.9 million barrels per day (bpd) compared with its previous estimate of 12 million bpd.

Crude stocks rose by 1.6 million barrels for the week ended May 6, according to market sources citing American Petroleum Institute figures, while analysts polled by Reuters had expected a draw of 500,000 barrels.[API/S][EIA/S]

European refiners’ crude and oil products stocks stood at about 1 billion barrels in April, down 10.3% on a year-on-year basis but nearly the same level as in March, Euroilstock data showed. Middle distillate stocks fell by 15.4% on the year in April, and by almost 3% from March, the data showed.