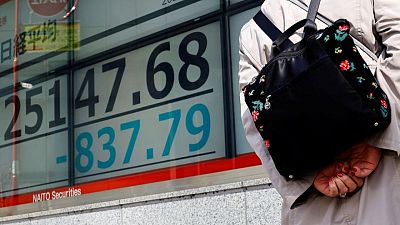 NEWYORK – Wall Street closed higher on Tuesday as investors waited for inflation data and worried about the prospects of slowing economic growth and the impact of policy tightening.

U.S. Treasuries rallied, with the yield on the benchmark 10-year note tumbling from a more than three-year high to below 3% as investors reassessed the inflation outlook before U.S. consumer price index (CPI) data is released Wednesday.

U.S. crude oil futures dipped below $100 a barrel to their lowest level in two weeks as the demand outlook was clouded by coronavirus lockdowns in China and growing recession concerns, while a strong dollar made crude more expensive for buyers using other currencies. [O/R]

Markets have been volatile across asset classes due to a combination of surging inflation and fears that monetary tightening aimed at slowing price increases would cause a slowdown in global economic growth.

After turning red for a few hours earlier in the session, the S&P closed up slightly while Nasdaq added almost 1%. Technology, the market’s biggest growth sector, was leading gains as investors reacted to falling bond yields and bounced back after a furious sell-off on Monday.

“If we’ve seen the worst of the rate of change from long-term interest rates, it may create room for equities to do a little bit better,” said Sameer Samana, senior global market strategist at Wells Fargo Investment Institute in St. Louis.

MSCI‘s gauge of stocks across the globe gained 0.08%.

Matthew Miskin, co-chief investment strategist at John Hancock Investment Management, was reassured by policy makers including Cleveland Federal Reserve Bank President Loretta Mester. While Mester said unemployment may increase and growth may slow, she added that tightening should not cause a “sustained downturn.”

“They’ve been so hawkish so any slight move off that the market wants to sniff that out,” said Miskin. “Sentiment wise, a lot of people are looking for capitulation. The dots aren’t completely connecting yet for that.”

The U.S. dollar was choppy on Tuesday but held near a two-decade high ahead of the hotly anticipated inflation data which could provide insight on the Fed policy path.

“It’s the calm before inflation data tomorrow, so this is allowing a breather for risky assets,” said Joe Manimbo, senior market analyst at Western Union Business Solutions in Washington, D.C. with trader positioning that was “working in the favor of risk assets.”

Earlier data showed China’s export growth slowed to its weakest in almost two years, as the central bank pledged to step up support for the slowing economy.

“It’s a risk recalibration. There’s no other catalyst, other than it’s gone too far, too fast,” George Goncalves, head of U.S. macro strategy at MUFG Securities said, referring to yields. “Maybe we’re going to get a period of inflation that won’t be just heading higher unabatedly.”

Spot gold dropped 1.0% to $1,835.86 an ounce as investors eyed the rising dollar and waited for Wednesday’s inflation data.

Elsewhere, bitcoin was up 3.7% after earlier falling to its lowest level since July 2021. Tuesday’s gain recovered some losses from its 11.8% plunge on Monday.